This Week’s New Books – The One Where I Go Crazy

So I went to the “Boekenfestijn” here in the Netherlands, which is a travelling exhibition kind of thing that sells thousands of books that bookstores or distributors don’t want any more for extremely cheap. Sometimes they are a little damaged, but more often than not they’re in perfect condition. So, I ended up buying 26 books. You can click the picture below to see the titles better.

Click on the covers or titles to go to their Goodreads page. 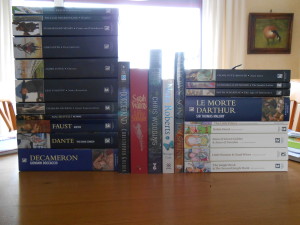 The left stack is all books that I need for classes next year.
In there we have Robinson Crusoe by Daniel Defoe, Hamlet by William Shakespeare, Crime and Punishment by Fyodor Dostoevsky, Don Quixote by Miguel de Cervantes Saavedra, Ulysses by James Joyce, Anna Karenina by Leo Tolstoy, Great Expectations by Charles Dickens, The Prince by Niccolò Machiavelli, Faust by Johann Wolfgang von Goethe, The Divine Comedy by Dante Alighieri and Decameron by Giovanni Boccaccio.

The middle and the right stack are books that I thought looked interesting or were classics that I’d like to read some time.
The non-classic ones are The Borderkind by Christopher Golden, The Little Stranger by Sarah Waters, The Fade by Chris Wooding, Morrigan’s Cross by Nora Roberts and Shadow’s Son by Jon Sprunk.
The classics are Jane Eyre by Charlotte Brontë, The Scarlet Letter by Nathaniel Hawthorne, The Age of Innocence by Edith Wharton, Le Morte Darthur by Thomas Malory, The Little Prince by Antoine de Saint-Exupéry, Robin Hood by Henry Gilbert, Anne of Green Gables & Anne of Avonlea by L.M. Montgomery, Little Women & Good Wives by Louisa May Alcott and The Jungle Book & The Second Jungle Book by Rudyard Kipling.

For those who counted along, that’s 25. The last book I bought is a sudoku book with very hard ones you can’t solve instantly so I won’t be bored in class. ^^

I loved The Secret Garden (review), so I decided to order another book of Frances Hodgson Burnett. Thanks to the author for providing this review copy! Isn’t it awesome that it’s called Nyx? I love the cover, I hope the book is just as good.

book haul, classics, this week's new books, to be read