Hi guys! It’s been a little while since I did a mailbox post because last weekend was very busy because it was my birthday (yay :D), so this week’s haul also includes my birthday books.

In only two more week’s I’ll finally be done with EVERYTHING school-related. I’m waiting for some marks back and have a resit later this week, but if all goes well I won’t have to do another resit.

In other news, I’ve been reading like CRAZY. I don’t know what’s wrong with me, but I already read ten books this month. I haven’t read this much since.. Well never, to be honest.

Click on the titles to go to their Goodreads page.

My family coordinated gifts which resulted in me finally having the entire Series of Unfortunate Events books by Lemony Snicket. They were my favourites when I was young, and I’ve been having a blast rereading them. I never read the last one, The End, though, so no spoilers! 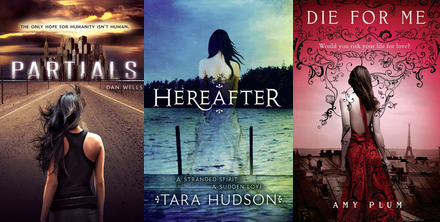 Massive thanks to the awesome people over at HarperCollins for providing the first books these series. I’ve seen these around for a while but since you can’t buy every book I passed them on. I’ve heard great things about the dystopian book Partials; Hereafter looks like an interesting paranormal romance ghost read and Die For Me is set in Paris, which almost can’t go wrong. And an unsolicited review copy of Born of Illusion showed up on my doorstep this week, also courtesy of HarperCollins. It’s set in 1920s New York and features illusionists, magicians and séances. I’ve already finished it, so you can expect the review appearing on my blog very soon.