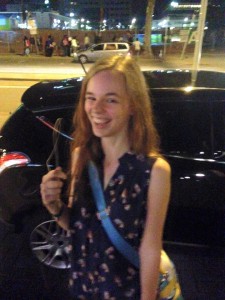 Just after the Seether concert, holding the guitar string I conquered

One more week. One week of being in sort of an in-between place – I’m waiting to finally get a yes/no on my thesis, which will determine whether I’ll have to do it over or whether I’ll start my master’s degree on September 1st. I’m someone who likes to be prepared, and the fact that these deadlines are all so close is bothering me. In under seven days, I have to make sure to bully my teacher’s into filling in my thesis mark, badger the student desk into giving me a piece of paper to prove I’ve gotten my degree, and pass that degree on to the student desk of a different university. It’s either this, or everything will fall apart and I’ll be a very sad panda.

I did have a very good week. Since finishing my thesis I’ve been sleeping a lot, and just generally doing nothing at all. It’s nice not to have to work on anything, even if it’s just for two measly weeks. I went to a Seether concert and it was fabulous. I gave the singer a high five (as awkwardly as can be) and managed to get my hands on one of the strings of his guitar. Definitely the highlight of my week.

I wrote the post Jane Austen and Me partially because I signed up for the Austen in August event and partially as an experiment. While I love my reviews, I want to write a bit differently, maybe more conversationally, and this post was the result of that. The comments were positive, so I think I’m going to deem it a success! In the review department I wrote about Dark Prince, a paranormal romance with the most alpha of alpha males, and Forbidden, a shape shifter urban fantasy.

This week’s Cactus post discusses three graphic novels that I read lately. I was a bit disappointed with Nimona. While it started off well, I thought that it lost a bit of its shine the further the story progressed. Both Lost at Sea and the first new Thor were lovely. 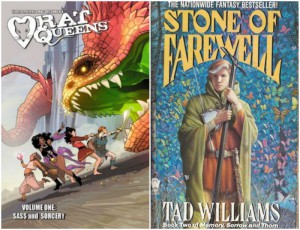 The infamous Bout of Books readathon was being held this week, an event where readers from around the world try to read more than they usually would. My goal for the readathon was to finish a book – and I did! I managed to finish Stone of Farewell, second book in the Memory, Thorn, and Sorrow series that carries a whopping 750 pages. When taking a break from that brick, I reread the first volume of Rat Queens. I enjoyed it more on reread than I did on first read. These ladies are so cool – I’d definitely bring them with me if I ever went questing.