Next to my thesis I still have two other classes, and for one of them I had a deadline this week. We’re writing an article on Black Pete (Zwarte Piet), a figure from the yearly Dutch celebration of Sinterklaas. Honestly, I felt like I was writing an elementary school work piece, instead of an academic one.

In other news, my grandma turned 90! We had a nice party with all of the family, and I think she really enjoyed it. I also went to a Friday Night Magic event (which was held on a Thursday, go figure), and managed to beat two out of four opponents at playing Magic the Gathering. After that we went out for drinks, which was nice as well. Today I’ll probably be having Easter lunch, eating way too many eggs. Happy Easter, everyone!

I don’t tend to hold myself to my to be read lists, but I thought I’d share a few books I might be reading this month anyway! In reviews, we have the dark YA story Cemetery Boys by Heather Brewer, and the first book in a new series by Charlaine Harris, Midnight Crossroad.

Since Saga was in a bundle I bought, I finally tried this very popular graphic novel. I’ve reviewed the first three volumes on Irresponsible Cactus. 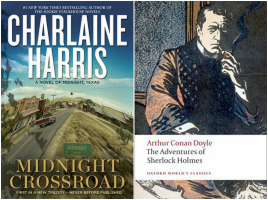 Not *that* much reading this week, but mainly because I’ve been busy. The Adventures of Sherlock Holmes is a collection of twelve short stories. Usually I’m not a huge fan of short stories, but these ones were perfect – just enough detail to be interesting, condensed enough not to get boring. I also finished Midnight Crossroad, which I already reviewed, since it was a book I received from the publisher.