So My House Was On Fire Friday…

…and I was in it. The dishwasher in the kitchen caught fire (it wasn’t even that old) and started to smoke and smoulder. Luckily for us the kitchen door was closed, so the fire and the smoke didn’t spread. Bad thing is, the fire alarm didn’t go off either. I was in the shower when my brother started frantically hitting the bathroom door, yelling that we had to leave the house NOW. I quickly pulled on some sweatpants and grabbed a shirt (didn’t bother with socks or shoes) and ran out into the cold.

We called the fire brigade, which came within five minutes (joined by the police and an ambulance) and they smashed in our kitchen window and put out the fire.

Except for our slightly traumatised cat, no one got hurt. We can’t stay in the house though because of the toxic fumes of burning plastic, and the cleaning crew can’t come until tomorrow. The kitchen is ruined, and we got some smoke damage throughout the house, but it’s not as bad as it could have been.

I made some pictures with my phone yesterday. 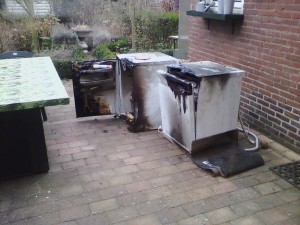 This is the dishwasher and the fridge after the fire. As you can see the front half of the fridge melted off. 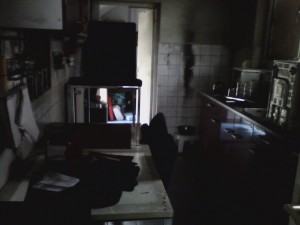 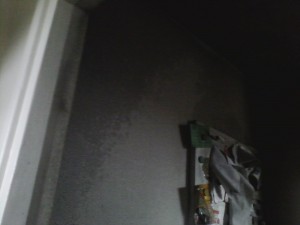 The kitchen and the kitchen walls. They used to be bright white, and those black marks aren’t shadows.

So, that’s pretty much why my posting might not be on schedule the upcoming week. Hope you guys are all having a great week (or at least better than mine!).