Today I am interviewing Theodore Weesner, author of The Car Thief. Click here to find out more about the book and the author. 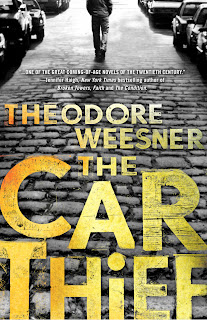 Theodore: I don’t like to talk about myself, you can get details from the nice young gentleman who published my book. I’m a writer. And for writers, that’s saying a lot.
Can you tell us some more about your book, The Car Thief?
What I like most about ‘The Car Thief’ are the moments—and I believe they’re there—when the drama becomes strong enough that something magical begins to take place, even for me. Alex’s discovery that his brother is not his brother brought me to tears when I first wrote the scene and has done so a dozen times since, on reading through the scene again.
Where do you find your inspiration?
(I’m working to answer those questions in a personal memoir I have underway called ‘Hoodlum Artist.’) As a short answer let me say that I lived a stupid and ignorant life of deprivation that commenced on being abandoned at age one, with my brother Jack, age three, to a 550 pound immobile woman named Alice Sleeseman, who took in children from broken homes in Flint’s ‘Little Missouri.’ We may have been dirty and scrawny but ours was a ‘Summerhill’ life of almost total freedom (I recall nothing but happiness, exploration, adventure) and I’m not complaining. If I was damaged on having been abandoned by my mother, I’m not smart enough to say. She was fifteen when she gave birth for the first time, on proceeding into a life devoted to drinking, dancing and honky-tonking.

She never visited, while my father stopped by every other weekend or so to see how Jack and I were doing. Grandma Sleeseman, as we called her, made her way each morning to a centrally-located rocker from which she issued instructions, sending Jack and me with some dollars and a rusty wagon to a grocery store on Fenton Road to buy food supplies, and instructing other children of the house in the preparation of meals in the kitchen. Jack and I always had an eye out for the appearance of our father’s green Chevy and the thrill we felt when it came into view.\

All along my life, in my writing, I had been exploring conflicts I had known before landing on my feet in the army and as a student. So it was that I called my first novel, which was inspired by need, experience, and artistic hunger, ‘The Car Thief,’ during the writing of which I drew on the guts of my own history in search of valid themes and exquisitely realistic details.

What do you like best about being a writer?
My autobiographical confession is that what I like best about being a writer is that it keeps accompanying me along every last road, lighting the way with smiles and fond feelings. What more could a person ask of the precious old craft?
Can you still find time to read yourself? If so, what books have you read lately that you recommend?
As a reader…I read mostly my own work-in-progress for several hours every day rain or shine, Christmas or Thanksgiving. For nearly two years now, getting blood transfusions every Monday that keep me alive and working, I take along a novel and enjoy a rare reading experience. My recent favorites include James Salter, for his use of language, Thom Jones for his intense power, Primo Levi for his philosophical seriousness, Jennifer Haigh and Stewart O’Nan and Bernhard Schlink for their fully orchestrated narrative brilliance…those and others I’m sure I’ll think of later.
Thank you for answering my questions!
Bio 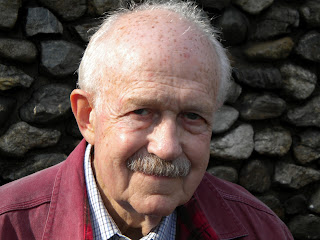 Theodore Weesner, born in Flint, Michigan, is aptly described as a “Writers’ Writer” by the larger literary community. His short works have been published in the New Yorker, Esquire, Saturday Evening Post, Atlantic Monthly and Best American Short Stories. His novels, including The True Detective, Winning the City and Harbor Light, have been published to great critical acclaim in the New York Times, The Washington Post, Harper’s, The Boston Globe, USA Today, The Chicago Tribune, Boston Magazine and The Los Angeles Times to name a few.

Weesner is currently writing his memoir, two new novels, and an adaptation of his widely praised novel—retitled Winning the City Redux—also to be published by Astor + Blue Editions. He lives and works in Portsmouth, NH.