As part of the Sykosa Whirlwind Tour I got a prewritten interview with the writer of Sykosa, Justin Ordoñez today. As in all Novel Publicity book tours, there are a lot of prizes to win ($550 in Amazon Gift Cards, a Kindle Fire), so continue reading and find out how to be eligible to win! 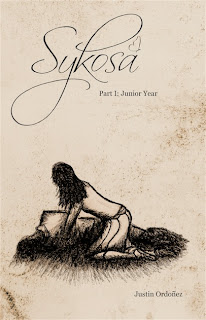 Novel Publicity: Who or What is a Sykosa?

Justin: Sykosa is a sixteen year old junior in high school. She’s the main character of a novel I’ve written by the same name. For a quick rundown, she attends a prestigious preparatory academy, is part of the school’s coolest clique, “the Queens,” and she has started dating the boy she’s secretly been crushing on for a year, Tom. It’s taken a year to start dating him because A) there was this SUPER HUGE thing that happened during her sophomore year, and it delayed things and made being intimate with Tom difficult, and B) she kinda starts seeing stars around him and loses the ability to behave in any type of serious manner.

Why is Sykosa different from other novels?

It’s different because youth driven literature has become full of metaphors for danger that seem to have split into either science fiction or fantasy. (Before I go any further, I like both genres, so I’m not being a snob!) Sometimes, it feels like instead of dealing with real problems, it’s easier to have kids use magic. And instead of facing real contemporary issues, kids should fight aliens or something. These metaphors are meant to represent real life, but I fear they’ve slightly crossed over into a bit of denial about contemporary Americanism, which is a hard topic to write about since our country is in an identity crisis, and has been for about 11 years. Sykosa is an attempt to counter-act this trend. When I was young, I read books about young people that blew me away like One Fat Summer and The Outsiders. These books felt real, and it felt like I could slip into them at any moment. The writing was gritty, it was unapologetic, it was brilliant. I just don’t see many of those around, and I wanted to write one, and I wanted to write one with a female protagonist.

Why did you chose cross-gender writing?

Toward the end of the my high school education, I was allowed to split my school day from my normal, traditional education and a newer style, self-directed educational program. I took an English class where my English teacher, someone who I’m still friends with to this day, gave me only one assignment for an entire semester, and it was, “Perform a deep self-evaluation of yourself and your writing and come up with one goal for what you’re going to improve on.” At the time, I was seriously into writing, and had taken to writing a few books per year, but most of them were in the first person, and they were just me talking about myself. The issue was that I had been in a serious car accident the year prior and I had injured a friend in it. (He fully recovered, but never forgave me). I had tried to write a first person story about myself many times since the accident, but I was constantly failing because I was dealing with some lingering self-loathing and guilt. As a way to get away from it, I decided I wanted to work on a story I had been thinking about for a while, but that I never started writing for one super scary reason.

The main character was a teenage girl.

Odd as it might sound, I was intimidated by the fact that the main character was a woman. So I faced my fear and said my goal would be to write women better, and I proceeded to work with several teachers and several female students to help me craft a female character that was realistic, yet met my vision of her as well. This challenge stuck with me into my adult life, and it eventually found its ultimate form in Sykosa.

How will I know I’m a fan of Sykosa?

I’m glad you asked! Sykosa.com has tons of stuff to help you determine if this book is right for you. Below you’ll see some humorous diagrams I’ve made, but at the website you can read an excerpt of the book, watch the book trailer, read character profiles and really get a solid understanding of Sykosa’s world.

What kind of stuff influenced you to write Sykosa?

The primary motivators for Sykosa were Buffy The Vampire Slayer and It by Stephen King. It so happened, in 2001, I moved in with a woman I was dating. She was a fan of Buffy, so I had to watch it and became a fan myself. While most people were probably drawn to the vampire killing, it was the last thing I was interested in. I thought Whedon created an interesting cast of personalities and analyzing them was something I enjoyed. At the time, I was reading It. What I liked about It was the small town, insular feel to the novel, and how the inhabitants of this town were able to show a “front” of values, but were secretly hiding and allowing evil to proliferate all around them. From these two things came Sykosa, a girl who does not have any super powers, nor does she kill any vampires, but she did have a traumatic event happen in her life, and she’s struggling to deal with it, and its made no easier by the fact that her small, insular parochial school has decided to ignore the incident.

Do you have any tips for people who are struggling with writing or want to take it up?

I do. First off, keep struggling. It’s a worthwhile struggle. There’s a lot of be gained from writing. And for those who want to take it up and for those who are already writing, I can’t stress this enough: Draft. And by the I mean, write in drafts, don’t sit in a chair and challenge yourself to make it perfect now, write it perfect now, but instead write in drafts. If something only gets 5% better, that’s fine, cause it’s just one draft of what will be many, and eventually, that 5%, that 3%, that 7%—it adds up and you end up with a really good story. But, if you try to knock it out of the park every time you step up to the plate, you’ll swing the bat a whole lot, and you’ll be tired and exhausted when you’re done, but you won’t have a ton to show for it. That’s when most people quit. They think, “I can’t do this” or, “I don’t have the talent.” They don’t understand they’re doing it wrong, that’s all.

When you’re not writing, you’re…

Singing karaoke. I go once a week with some close friends of mine. It’s a fantastic release, also you get feedback from an audience, which you sometimes miss from writing, and you can forget how exciting it is to share your work with others. My favorite song to sing right now is Gaga’s “You and I.” Gaga has got a great voice that she can make raspy if she needs to, and I’ve got a voice that can match the raspier songs, so I think I do her proud. Otherwise I’m singing the Killers, Kings of Leon, Oasis or Lauryn Hill.

As part of this special promotional extravaganza sponsored by Novel Publicity, the price of the Sykosa eBook edition is just 99 cents this week. What’s more, by purchasing this fantastic book at an incredibly low price, you can enter to win many awesome prizes. The prizes include $550 in Amazon gift cards, a Kindle Fire, and 5 autographed copies of the book.

All the info you need to win one of these amazing prizes is here. Remember, winning is as easy as clicking a button or leaving a blog comment–easy to enter; easy to win!

One random tour commenter will win a $100 Amazon gift card. Just leave a comment on this post, and you’ll be entered to win. For a full list of participating blogs, check out the official tour page. You can enter on just my blog or on all of them. Get out there and network!

Justin Ordoñez was born in Spain, raised in the mid-west, and currently lives in Seattle. He’s nearly thirty years old, almost graduated from the University of Washington, and prefers to wait until TV shows come out on DVD so he can watch them in one-shot while playing iPad games. For fifteen years, he has written as a freelance writer, occasionally doing pieces as interesting as an editorial, but frequently helping to craft professional documents or assisting in the writing of recommendation letters for people who have great praise for friends or colleagues and struggle to phrase it. Sykosa is his debut novel.

He hopes to one day settle down with a nerdy, somewhat introverted woman and own 1 to 4 dogs. Visit Justin on his website, Twitter, Facebook, or GoodReads.