Almost forty years ago, Nate Mason witnessed something that has haunted him for his entire life. Now Nate goes back to the place, and confronts his fears. That is the premise of Angry Robot/Exhibit A’s newest release of Dan Newman, The Clearing. Today I’m asking Dan a few questions! You can find out more about the book on Dan’s website, Exhibit A, Goodreads or Amazon. 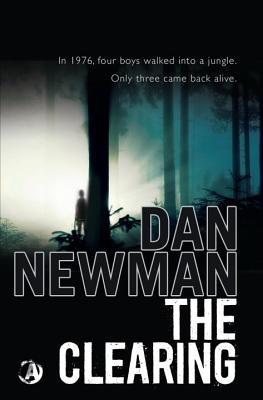 Nyx Book Reviews: Hi Dan, welcome to Nyx Book Reviews! Can you tell us a bit about yourself?
Dan: Hi Celine… and thank you so much for letting me stop by. It’s great to be part of Nyx!
This is always the toughest question… just who the heck am I? Hmm. Well, thanks to my father’s career in international development, I’m the product of a rather mobile lifestyle – there’re a number of folks out there like me, people who moved around the world as their parents built careers that involved living overseas. I was an “expat” for most of my growing-up years, having lived in the Caribbean, (St. Lucia, where The Clearing is set), the Kingdom of Lesotho, Swaziland, Australia and a few other places along the way. Right now I live in Canada, and as I watch the seasons roll toward another frosty winter, I’m seriously wondering why… But then spring rolls around and all is well again.

Could you describe your book, The Clearing, in one sentence?
One sentence, huh? Okay, how’s this:
On an island shimmering in the sun drenched Caribbean, one man’s past is waiting; and at the end of that roughly hewn dirt road that winds blindly through the mass of green, it always knew he’d come back.

Your book is a psychological thriller, so characterisation is even more important than in a regular book. How do you go about really crawling into your main character’s head?
When I look at someone who is interesting in any way – it could be an exaggerated personality type, perhaps a scar running across their face or a certain tick in their speech – invariably what we’re seeing is the end point of events in their past. So what really makes someone interesting, to me, is their past. People act and behave in predictable or erratic ways as a direct function of their past experiences. In the case of characters in a novel – and this is for me, anyway – I need to know a great deal about their past, regardless of whether or not it makes it into the book. In fact, only fragments of a character’s very large and complex past make it into the pages of the novel, but by knowing the rest, I think as a writer you can make subtle inferences that feel real. At least, that’s the hope. The better I know their past, the more I can predict their actions, and hopefully that makes for more interesting and compelling personalities – that can sit up from the page and dodge the early and ugly death of the dreaded two-dimensional character (followed shortly thereafter by the early and ugly death of the author’s career.)

What authors inspire you in your writing?
Now this is an easy one, because I have a clear winner and a couple of runner ups here. Cormac McCarthy is the guy. Period. End of discussion. His novel The Road is without a doubt the most impressive piece of writing that I’ve ever read, and the reaction that I had to the book left me stunned – I mean sitting there with a thousand yard stare – and then inspired that a piece of writing could do that to someone. That level of competence is, for me, the Holy Grail. If you’ve not read it, do so. And if you have, read it again, and see how the man uses everything at his disposal to tell the story – imagery, words, the very punctuation itself. Genius. Everything in the book is a vehicle for mood in that story. (Sorry for the rant!)
I also hold writers like Andre Brink and Steven King at that level. In the case of Mr.King, to my mind he has never been fairly held up for his sheer literary value – regardless of his commercial success. If I go far back enough, the writer that actually got me reading was Wilbur Smith. His early books are just fantastic. There’s a beat up old copy of Hungry As The Sea that I can see across the room as I write this… Wilbur Smith tells one hell of an entertaining tale.

What has been the hardest part of writing so far?
If I look at that question in a larger sense (rather than the act of sitting down and getting it done), I’d have to say the hardest part is/was querying. When you go through that process there is the potential for so much negativity, and it can really make you question what you’re spending all that time doing. And I wonder how many wonderful writers we never got to read because they got tired of the stream of rejections and just said screw it. It’s a tough part of the ride, but I can tell you that in the end, when your agent calls and says “are you ready for some good news?” it’s all well worth it.

Thank you for answering my questions! (:
Thank you, Celine!