I would like to welcome Toni on Nyx Book Reviews! She’s the writer of paranomal romance Raven’s Kiss. She has been so kind to answer my questions. This tour is part of The Bookish Snob Promotions. Click the banner to find more blogs participating! 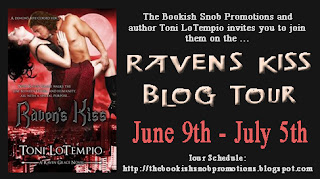 Nyx Book Reviews: Hi Toni, welcome to Nyx Book Reviews! Can you tell us a bit about yourself?
Toni: Sure. Well, I’ve been writing off and on since I was twelve 🙂 More off than on, unfortunately. In 1995, I joined the staff of SUSABELLA PASSENGERS AND FRIENDS, where I have been a staff reporter for over 10 years. In January, I joined the staff of NIGHT OWL REVIEWS as the suspense reviewer/columnist. My column, DARK STREETS, is featured on a monthly basis.
In 2007, Whiskey Creek Press published BOUND BY BLOOD, a tale of possession, and EBONY, which deals with zombies and the dark side of man. I have several other titles published by WCP, and Echelon Press published WITCH’S PAWN in 2008. In 2010 I self published NO REST FOR THE WICCA, which made Amazon’s list of top one hundred in Occult in March 2011, and my short story, THE SACRIFICE, appears in the e-published anthology KISS ME KILL ME. My latest, RAVEN’S KISS, debuted in April of this year.
I enjoy writing in the paranormal genre, but I can also write contemporary romance/mystery as well. Most of my writing is done on the weekends as I work full time and live in Clifton, NJ, with my muses: Rocco, Maxx, Gata and Trixie. Rocco is also known as Rocco the SciFi Blogging Cat and has appeared on the SciFi Saturday Night website and radio show, and also on the Kids Need To Read website where he holds the distinction of being the first (and possibly only!) blogging cat to support this charity.
Could you describe your book, Raven’s Kiss, in one sentence?
Hot Shapeshifter travels through parallel time in search of the demon who cursed her and becomes involved with a hotter than hot Scotsman. 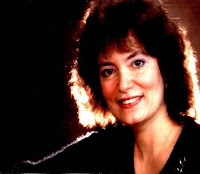 When and why did you decide to become a writer?
I don’t know as anything actually inspired me, or if it was even a conscious decision. it was sort of a natural progression. My mother taught me to read when I was three, and growing up I loved comics – Superman, Batman, etc. If I didn’t like the way a story ended I’d just rewrite it LOL.
Where do you find your inspiration for your novels?
I get inspiration in the oddest places sometimes. 🙂 It can come from the name of a street, sometimes someone will say a catchy phrase and I’ll build a story around it. And one book, a YA fantasy I wrote, got its name and the inspiration for the character from the side of a garbage truck.
Can you still find time to read yourself? If so, what books did you enjoy in particular?
Oh I always make time to read. I believe you have to be an avid reader in order to be a good writer. I tend to gravitate toward mystery and suspense, and I love books by James Patterson, Tess Gerritson and Alex Kava, as well as cozies by Rita Mae Brown and EJ Copperman. On the paranormal side I LOVE LOVE LOVE Michelle Rowan. I worship at her altar.
What are your plans for the future? Any more books coming up?
I’m currently working on two – no, wait – three other books I hope will become series, and since I’ve recently acquired an agent they will have to go through him first (the traditional pub route). On the indie side, I’m also working on two novellas which will be sequels to Raven’s Kiss and No Rest for theWicca, which I hope to release around the holidays. I still havent’ decided if I’ll release them seperately or as one book. I’ve also got a YA with a Dark Shadows tie-in planned for release next April.
Thank you for answering my questions! (:
And thank you for having me on your blog! I so enjoyed this chance to connect with readers, and I hope you all enjoy the book!

Raven Grace was a college senior with ambitions of a career in law enforcement when she met the demon Aega, whose bite turned her from mortal to Shapeshifter. Now a member of the Recovery Organization, Raven keeps the peace between humans and errant Hellhounds, trolls, wizards and the like while trying to track down Aega and bring him to justice. After a particularly dicey encounter one night with a Hellhound, she goes to the aid of a girl who’s been attacked and near death—and is amazed to find Aega’s bite mark on the girl’s arm. Determined to get to the bottom of this, she revisits the victim’s apartment and there discovers her closet is a portal to a parallel universe, where people she knows lead vastly different lives.

She also gets a glimpse of the Recovery Captain there—a six foot, redheaded Scotsman named Finn McPhee, whose sexy accent and even sexier bod sets her senses aflame. Seeking answers, Finn takes Raven to the magickal underworld, where an ancient fae informs them the demon’s quest is rooted in Scottish mythology and magick. As they delve deeper into legend, the truth comes to light—Aega is only a pawn, subservient to another, darker demon…a being who knows the truth about Raven’s heritage, and who orchestrated her return to this parallel universe for the ultimate showdown. Now, Finn and Raven find their passion for one another must take a backseat to Raven’s battle with a dark force who won’t be satisfied until he’s claimed her soul for his very own… 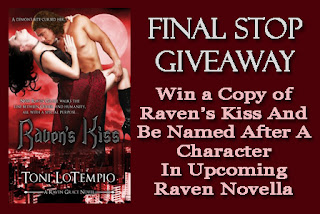 Visit the next stop: The Great, The Good And The Bad
See full tour schedule