Today we have another great author as guest here on Nyx Book Reviews, Christine E. Schulze! Christine has been so kind to answer a few of my questions. For my review of her book, Bloodmaiden, see below. This tour is part of The Bookish Snob Promotions. 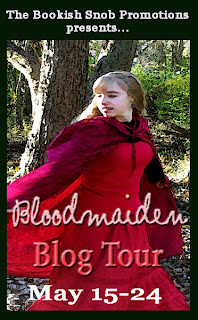 Nyx Book Reviews: Could you describe your book in one sentence?
Christine: Four dynasties, four aria, one brilliant quest:
A young couple, accompanied by a feisty sprite, a magical guitarist, an enthusiastic servant, and a mysterious fox must venture across the four dragon dynasties of Sulaimon to collect the sacred Aria, defying tradition for truth and justice in Schulze’s debute YA fantasy full of myth, action, suspense, and a dash of romance.
Your world includes different kinds of dragons. Do you have any specific myths or stories about dragons that inspired you?
Honestly, this is my first and probably last dragon book; I had never been a big fan of dragon books but had never written one either and decided I needed to add one to my fantasy repertoire. I determined I would write the kind of dragon book that I would enjoy.
The land of Sulaimon is divided into four dynasties, each ruled by a race of dragons differing in appearance, character, and personality. I did a bit of online research to learn about how different types of dragons might look, different powers they might have, and then added in bits of things I knew or heard about dragons plus adding my own unique spin.
For example, the dragons of Zale look very much like Chinese dragons and are a very wise, peaceful race, the friendliest of the dragons. The dragons of Varden are much more cunning and love riddles. And the dragons of Gauthier have a sort of medieval warrior flare, their brute strength most their prominent trait. The dragons of Tynan are snowy white and relate more to ancient traditions and rituals. I don’t want to say too much, but there’s a snippet on each of the dragon races.
Do you have any writing rituals to get into the writing mood?
I don’t have rituals persay; I have to be inspired, have to be “in the mood”. That being said, I never write a book from start to finish. My writing is entirely sporadic. If I feel like romance and that means I write the last chapters before the first, then so be it! I am working on something for Books By You right now and should be able to send them something already, only I’ve finished the last chapters before the first. ^_^
What message would you like to give readers through your writing?
First off, I write fantasy, so I always hope to transport readers to a new world; I hope for the world to be real to them, a place they can get away to for a time and imagine themselves inside an incredible story. I’ve been told I am good at creating starkly visual images and real emotions in my stories, and this is what I aim for.
As a Christian, I also usually like to include some sort of spiritual message; this doesn’t mean I’m preachy or awkward with things. I like the spiritual aspect to be naturally woven in. In Bloodmaiden, there are themes of peace, healing, courage, and forgiveness woven throughout. Such themes could appear in many children’s and young adult books, it’s just that for me, as a Christian, I’ve always done it on purpose in most of my books, to give back to God for the talent He’s blessed me with.
I would also like to encourage writers, young and old, to pursue their dreams! Or anyone who has a dream—follow it! It takes much hard work, patience, and persistence, but you can see the dream come alive, just like mine begins to unfold before me.
What do you like best about being a writer?
I love the creativity of it, and the hope in my ability to someday inspire the world through my books. I could never write anything but fantasy; the real world stifles my imagination. I love traveling to my worlds as much as I hope my readers do too.
Will there be more books set in the world you’ve created in Bloodmaiden?
I do not plan for there to be, no. Although I’ve written several series set in other fantasy worlds, this is one book which I believe will remain a stand-alone.
Thank you for answering my questions (:
Thank you for having me! I always enjoy sharing a bit about myself and meeting new friends and contacts through blog tours. Thanks again so much, and God bless!
~ Christine E. Schulze

Zale. Gauthier. Varden. These three dynasties… They all sound like something out of an ancient, oriental myth or fairy tale. The concept of humans and dragons helping and living in harmony with one another, without fear. To me, that’s exactly what they are. A distant dream only read of, whispered secretly, quietly yearned for. For, you see, I am the new Quelda of Tynan.

These words echo the mystery, horror, and romance found within Schulze’s fantasy novel. Along with her new husband, Chalom, Crislin must choose to embrace cruel tradition, run from it, or stand against it. The young couple’s only hope is to rally the help of the three peaceful dragon dynasties of Sulaimon-but tradition is not on their side, even outside the realm of Tynan. The dragons outside Tynan’s borders have been rumored as too stubborn and proud to believe their Tynanian brothers would commit such horrors as inflicted upon the Quelda. Gaining their aid is not a likely hope. Yet, any hope at all is valued in Tynan…

Author Bio
Christine E. Schulze has been creating books since she was too young to even write them in words. Her collection of YA fantasy books, The Amielian Legacy, is comprised of series and stand-alone books which can all be read separately but which weave together to create an amazing fantasy. Her fanatsies also incorporate many other genres, such as Christian fantasy, romance, and even a spark of horror at times. She hopes to inspire readers throughout the world with these books by publishing in both traditional and electronic formats to make them available to all readers.

Christine has published several stories with Calliope and Kalkion magazines and is an active member of the WEbook online writing community. She has also published several Christian/fantasy books which are available at various online retailers, as well as publishing several eBooks via Writers-Exchange.

Her latest and most exciting venture includes her publications with Old Line Publishing: Bloodmaiden and Tears of a Vampire Prince: the First Krystine. She also anticipates her upcoming publication with Old Line, Lily in the Snow, as well as releasing The Chronicles of the Mira with Writers-Exchange in both paperback and electronic forms.

Christine currently lives in Belleville, Illinois in her first and most thrilling apartment.

Visit the next stop: A Chick Who Reads
See full tour schedule

Or continue reading for my review of Bloodmaiden!

3 out of 5 stars
Published by Old Line Publishing, LLC

The story is set in the world of Sulaimon, consisting of four dragon dynasties, in which dragons live in harmony with the people they protect. But in the dragon dynasty in the north, in the land of Tyrnan, the dragons ask horrible sacrifices of their people. And a young couple, Crisilin and her husband Chalom, have been chosen to fulfil the frightening ritual. By a twist of fate they are able to escape from their certain death, and get the opportunity to free their people for ever. We follow them on their quest to collect the four Aria, parts of a magical song that have been created so the dragons will never abuse any human being.

This book is truly beautifully written. The way the author describes the world, the way she chooses words and makes them flow. It draws you in, makes you feel what the characters feel. There are many sad stories in this book, and I really felt for those characters. But herein lies the biggest flaw too. In some passages we see such amazing writing, but then we have to fast-forward to the next event and the next environment with other characters. There just isn’t enough time to enjoy it.

This story is incredibly fast paced, too fast paced even. We jump from kingdom to kingdom, travel at an inhuman speed, get all important events and plot twists dished up right after each other. There is just no time at all to get to know our travellers, to enjoy the fantastic world that is created in Bloodmaiden. It does keep you at the edge of your chair once the story sets off, but sometimes you need to catch a breath as reader. It sometimes gets a little bit too overwhelming, too much information in one time.

This also showed in the narration and the interaction between our couple. The events are described pretty accurately, but we seldom hear what Chrisilin, our first person narrator, feels, what she thinks about it. And this feels like such a waste, because we have seen how amazing Mrs. Schulze can write, and what she could have done with it, but just didn’t. Our couple never talks, the only interaction we see is them holding hands or sleeping in each others arms. Sometimes Chalom throws in a “Are you alright, love?” and that’s it for deep conversation that chapter. I did buy their love for each other though, there certainly is a bond between them. Sometimes we get a peek into their carefree past, and then they truly shine together.

Another little annoyance I had while reading this is that Chrisilin refers to our world. She once compares something to a roller coaster, or calls a palace “Chinese looking”. How is this possible when she lives in a totally imaginary place? She tells us her aunt has told her about other worlds (including ours, apparently) but then forgets to mention how this different-worlds thing works. It felt like something the author didn’t think through well enough.

This book has so much potential. If it had been longer and more extensive this would have been one of my favourite books. It has everything, but everything crammed in too few pages. I’d love to see what happens when Mrs. Schulze takes her time to write a book. This is a promising author I would keep my eye on in the future!