YA Crossover – What does that mean?

Around four hundred years ago, I signed up for this blog tour and immediately went home to prepare the initial concept sketches for my tour bus. That done, I also needed to decide on the genre of the whole Hobson & Choi series. You see, it has a teenager as a protagonist, and she deals with normal teenage things such as identity issues, early fumbled attempts at dating and, obviously, spurting bloody murders.

Unfortunately, the other protagonist is a middle-aged male who deals with detective issues such as solving mysteries, his own dark past, a tangled relationship history and, again, those gushing corpses. So we’re probably not YA. Or are we half-YA?

Fortunately, people have been throwing the term “YA crossover” around for a while now, so I decided to borrow that for my nefarious purposes. Slapped it in the Genre box, went back to deciding how many iBeers would go on my rider for this tour.

Admittedly, based on my research (googling it), a lot of books described as “YA crossover” seem to be teen-focused straight-up YA novels popular with a large number of adults. Your Harry Potters, Twilights, Hunger Games and Batman – The Novels. Hobson & Choi is a few million sales and an inconvenient adult main character from being in that company.

But I still like the term “YA Crossover” to describe Hobson & Choi, probably because I’ve read a lot of comic books for many years. As a result of this tsunami of tSpider-Man, whenever I hear “crossover”, I translate it to different series spilling into each other, Batman meeting Superman or Ant-Man joining the X-Men. More topically, The Flash and Arrow TV shows just did this exact type of crossover, as both TV and movies try to turn into comics.

My point being: if Hobson & Choi is “YA Crossover”, it’s the kind of crossover where YA and crime combine their tropes to co-exist in the same story, fight angrily over misunderstandings, then finally team up to save the day. And if that appeals to you, you should absolutely buy the first book and try it out.

Now, I’m off to set up my blog tour merch stand, where I sell P tags cheap and /P tags for a small fortune. 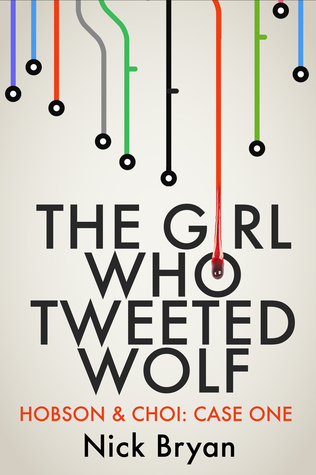 “If we get 400 followers, John Hobson will solve that nasty wolf-murder case for free! Fight the thing himself if he has to! #HobsonVsWolf!”

Angelina Choi was only trying to drum up some Twitter followers and make a good impression on her first day interning at John Hobson’s one-man detective agency.

But the campaign went viral and now they have a murder to solve, no money coming in, and an unwilling Hobson faced with battling some enormous beast.

With both follower and body counts rising, can they crack the case without offending everyone or being eaten by a huge dog?

The Girl Who Tweeted Wolf is the first case starring Hobson & Choi, a bickering, mismatched detective duo for 21st century London. This book collects the debut storyline of the hit darkly comic crime web serial, extensively rewritten and improved for this definitive edition.

‹ Review: Plus One by Elizabeth Fama Review: World War Z by Max Brooks ›