This Week’s To Be Read

You might have noticed that I’ve been making some changes around here lately. After my post on The State of Blogging I realised I’ve been way more into blogging since I stopped doing any blog tours and cut down on the memes. At the moment I’m even considering doing away with the last meme I was participating in, the mailbox one. It might not go entirely – I might make my own version of it, tinkering it to my needs – but I won’t be linking up any more. First of all, it’s a bother and an obligation I don’t like. Secondly, I often don’t have time to comment back, and since it’s a social hop, you kind of have to. If it’s just my own blog, probably the only people stopping by will be my followers, whom I like more than the randoms that hop around like there’s no tomorrow, commenting the same thing on every post. It’s not that I’m averse to meeting new bloggers, absolutely not. If I don’t know you yet feel free to introduce yourself and your blog to me! I just don’t like the guilt and stress that comes with doing memes.

The only problem is that if you cut away the memes and the blog tours, the only thing left is reviews and the occasional discussion post. That just felt too heavy and too empty. I asked around on Twitter a bit and found out that people like to browse through things like top lists, or to be read lists, or any other kind of non-review lists. Well, that’s good, since I love making lists! And I love tracking what I’m reading, how much I’m reading (like I did in the post Doing the Math – Again) so it just feels natural to talk about the books I’m going to read and have read without going into review territory. This Week’s To Be Read was born! I’ll currently post it on Wednesdays, but might change that to any other day in the week if that feels better.

Since this is the first time I’m doing a This Week’s To Be Read, it’s hard to recap last week’s post! I’m still in a good reading spree at the moment, with twenty books read in June. Last week’s reading included:

With the exception of Rise, I had a good reading week. A Touch of Dead was exactly what I was expecting it to be, some short stories featuring Sookie, but nothing too deep. Among the Nameless Stars confirmed yet again why Diana Peterfreund is one of my favourite authors. The same with Personal Demon, which is another amazing book in the Women of the Otherworld series. I can’t wait to read the next part in the series, but I’m holding it off for another week to make some room for other books.

I really hope to keep this reading spree going, but since I’m not much of a mood reader anyway there is no point in making a fuss over what to read next. Here is what I’ll hope to read next week: 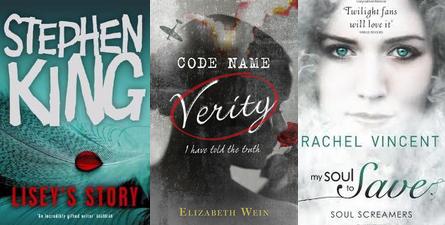 Lisey’s Story is a great disappointment for many Stephen King fans, but so far I’m very much enjoying it. King has a way with words that I love, and even though the made-up words in the book are a bit annoying, his stories just enchant me. That guy can write any genre, and I would still read it. Code Name Verity I’m still not very sure off. So many people assured me that it was very different from anything World War 2 related I’d have ever read, and they’re right about that. But to be honest I don’t think my life feels very complimented by this book about a girl describing planes, planes and some more planes. I haven’t started My Soul to Save yet, but this promises to be a quick and enjoyable read, just like My Soul to Take.

Have you read any of these books? And what are you reading this week?

‹ Reading Classics: The Prince by Machiavelli Review: Once by Anna Carey ›