Hi guys! I hope you all had a good week. Mine has been pretty quiet, lots of work and reading. For Christmas I got the first season of the X-Files TV show, and I’ve started watching them. The show is so 90s! Those special effects are hilarious. The acting and stories are great though, it feels kind of like Fringe meets Supernatural.

I feel a bit like I’m in purgatory right now, since I’m waiting for two pretty important messages – a response to my master’s degree application, and whether my short story submission will be added to an anthology. Both will give me an answer in a week or three, but I absolutely hate waiting!

Because of a scheduling malfunction I posted two discussion/feature posts this week instead of one. Even after five years of blogging, I sometimes hit publish instead of schedule! Oh well. I’m reviewing two pretty big names this week, both popular because of their dark reads, though one for young readers and one for adults. I’m featuring some unknown fantasy books, and asking for your advice on whether I should format my old reviews again.

The one and only Dewey’s readathon is coming up again, and I’m signing up to participate! The second post of the week is about what it has been like to keep up with two blogs, Nyx Book Reviews and Irresponsible Cactus. 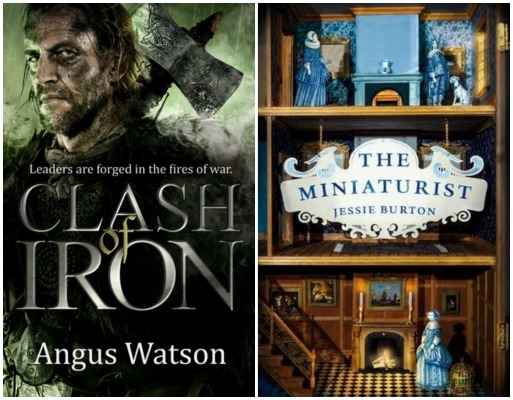 Not many books finished, but those were a lot of pages. Although Clash of Iron isn’t nearly a giant as many fantasy books are, I wouldn’t call a 500+ page book small either. Both reads this week were good, but not great. I love how The Miniaturist looks though, the cover is so pretty.