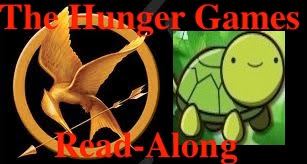 Running up to the release of the movie, Larissa from the Howling Turtle and Sharon from Obsession With Books are co-hosting a Hunger Games Read-Along! Every other day a blogger will share a little story, a picture, a video or something that has to do with that day’s chapter. To see the full readalong schedule, go here.

Today we are going to talk about Chapter Fifteen. For those of you who need a reminder, in this chapter Katniss wakes up after the tracker jacker stings. The nightmares are fading and the reality of the Hunger Games is coming back. She makes a pack with the little Rue, and they share food and comfort. 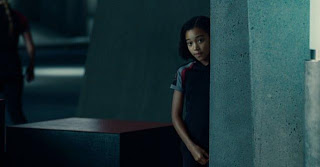 I found a still of Rue (played by Amandla Stenberg) in the movie on IMDB. Click on the photo to go to the source. She looks nothing like how I pictured Rue. For me she has a way more angular face, a bit more bird-like.

Chapter Fifteen is a very mellow chapter as far as that is possible in The Hunger Games. After the horror of the nightmares the tracker jacker venom induced, it’s time for a little bit of friendship during the Games. It really helped for me to establish the character of Rue more, and it was nice to see Katniss’s softer side.

Because nothing controversial happens in this chapter, and I still would like to create some conversation, I have thought of a game to make it a bit more interesting. I always love discovering new good books, and I’m sure you guys know of a lot of books that I have never heard about! So, let’s play…

I’ll go first. If you like The Hunger Games, you probably also like Divergent! In Veronica Roth’s debut the future city of Chicago is divided in five groups, each with their own characteristics. It reminds me a bit of the district system in THG. Also, the mean character Tris in Divergent is one strong lady, just like Katniss. It doesn’t have a love triangle, but since I don’t like love triangles at all, I don’t mind that one. If you’re interested in this book, you can check out its Goodreads page, or my review.

Have you read Divergent? Did you like it? Or do you have a way better recommendation? Leave a comment!

‹ In My Mailbox Review: Katana by Cole Gibsen ›