Review: The Vespertine by Saundra Mitchell

Dark, gripping, excitingly Victorian with a twist! I absolutely loved it.

This book combines two genres, taking the best of both. It has the ambience of a great historical novel set in the late 19th century and the gripping excitement of a paranormal book. Then, throw in a vibrant romance and mischievous friends and you have the wonderful book The Vespertine.

Amelia van den Broek (Dutch last name! I’m allowed some patriotism at times) is sent to Baltimore to have her first and last season, where she hopes to find a suitable groom. In the middle of the excitement her visit there brings (attending dances, calling upon friends) she finds out she has a special gift. She can see the future in the final sun rays at sunset.

It’s hard to decide what I loved most about this novel. I think I will go with the characters. Amelia makes a great protagonist. She has her own opinion and takes no reserves in making this clear. It was great to see a female character in a young-adult novel that actually stands up for herself, and can take care of herself. Overall Amelia was easy to relate to. For living in a completely different time (where holding hands in the park is scandalous) her motives are easy to understand.

Then we meet her one weak spot. Nathaniel Witherspoon. Is it a coincidence that his name rhymes with “swoon”? Because there is some definite swooning going on in the book, and the worst part is that you can’t help but swoon with her. I think it’s an incredible accomplishment if you can create a scorching tension between two characters in a setting where a slight touch on the wrist is like a kiss.

Then we have the beautiful writing. I was enthralled by it within a few pages, and it didn’t release its steel grip on me until I had finished the book. I did have an issue with the writing though; Ms. Mitchell has the habit to only talk about the events that truly matter. How is that a bad thing, you ask? It means that if the event she wants to describe is over, we jump forward into the story an hour, or a day. It means that in the middle of a deeply romantic moment between Amelia & Nathaniel, the story is broken off, and we’re at home again. Talk about an anti-climax.

The paranormal elements are subtle, yet different of what we are used to. We don’t get a lot of explanation on how the powers work, but then again, we only know what Amelia knows. What I though was brilliant is that Amelia doesn’t try to hide her powers. She actually uses them. If this is the smartest thing to do is another story, but I thought she handled her precognitive powers in a realistic way.

The plot is a swirling mixture of both cheerful events and absolutely dreadful moments. Ms. Mitchell isn’t scared to throw some pretty horrifying things at us. There are definitely some “Oh No!” parts in this book that make you have to keep on reading. I devoured The Vespertine from beginning to end.

Blurb
The summer of 1889 is the one between childhood and womanhood for Amelia van den Broek-and thankfully, she’s not spending it at home in rural Maine. She’s been sent to Baltimore to stay with her stylish cousin, Zora, who will show her all the pleasures of city life and help her find a suitable man to marry.

Archery in the park, dazzling balls and hints of forbidden romance-Victorian Baltimore is more exciting than Amelia imagined. But her gaiety is interrupted by disturbing, dreamlike visions she has only at sunset-visions that offer glimpses of the future. Soon, friends and strangers alike call on Amelia to hear her prophecies. Newly dubbed “Maine’s Own Mystic”, Amelia is suddenly quite in demand.

However, her attraction to Nathaniel, an artist who is decidedly outside of Zora’s circle, threatens the new life Amelia is building in Baltimore. This enigmatic young man is keeping secrets of his own- still, Amelia finds herself irrepressibly drawn to him. And while she has no trouble seeing the futures of others, she cannot predict whether Nathaniel will remain in hers.

When one of her darkest visions comes to pass, Amelia’s world is thrown into chaos. And those around her begin to wonder if she’s not the seer of dark portents, but the cause. 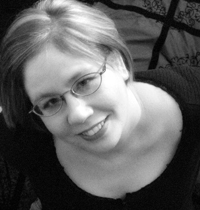 When looking for some more information about the book I stumbled upon an “Instant Interview” package on Saundra’s site. Pretty cool, having an interview without actually having to do the interview! I picked out a few questions that I thought were the most interesting.

Why did you decide to write a novel?
I love writing films; I love that filmmaking is so collaborative. But sometimes, it’s nice to write something that’s wholly yours. The characters say what you want to say, the way you want them to say it- the scene focuses on the vista you choose. I love working with actors and directors, but sometimes you want to keep all the toys to yourself!


Did you decide to write for young adults intentionally?
Actually, it was an accident. I thought I was writing for an adult, mainstream audience. But one of my early beta readers asked, “Did you know this is YA?” And I didn’t. Somehow, even though I like YA television and YA fiction best, even though I’ve written short films for a teen film series for more than a decade- I still had no idea that I wrote a YA novel. But now that I know, I’m digging even deeper into the genre and loving it.

What are your favorite YA novels?
I have a hard time answering favorite questions, but I can give you a short list. The Silver Kiss by Annette Curtis Klause, how i live now by Meg Rosoff, Looking for Alaska by John Green, The Forest of Hands and Teeth by Carrie Ryan, Alanna: Song of the Lioness by Tamora Pierce, and The Outsiders by S. E. Hinton. But that’s just the short list. The full list goes on to infinity!

Why Victorian?
First, I enjoyed the latitude. Instead of hanging out at the coffee shop, my characters could hang out at the park and goof off with a bow and arrow. It was perfectly reasonable for one of the characters to meet another when he came to sketch an autopsy in his living room. No seriously! There were so many interesting places to go and unusual things for them to do.

Second, I love how modern it is. The industrial revolution is starting, cars are coming, trains are connecting cities, states, countries. Telegraphs send instant messages, and telephones are coming. Suffragettes are demanding their equal rights, Spiritualists are trying to crack the code of death, Scientists are discovering radium and vaccines, Aesthetics are brazenly exploring sensuality– this book may be set in our past, but it’s also set on the very edge of the characters’ future. It’s a time so ripe and trembling with change that it was a delight to explore.

And thirdly, it was just plain fun to write characters who could use words like folderol, gibbering, miasma and temerity in common conversation. Reading through period newspapers to figure out the depth and parameters of the language of the time was like eating candy for me.

What kind of research did you do?
I read a lot of books– books on Spiritualism and women in society, the early suffragette movement, household management, middle class social histories, period architecture and medicine, man, I read a ton of books. I also went online, and dug through the Baltimore Historical Society’s website thoroughly, traipsed through the Library of Congress, and read a ton of period newspapers. I re-read novels written in the period to check my language.

The fashions are a little off, though. I originally set the book in 1881, then later moved it to 1889. So the girls’ dresses are actually out of date. But, they all came out of period editions of Harper’s Bazar, as did Nathaniel’s wardrobe. Yow, we think of that period of time as being very sedate, but the real period color choices are WILD. I actually toned them down a little, because a purple and orange silk dress just doesn’t sound like it would look good in 2011, even though it was a very popular color combination in the 1880s.

Where did you get the idea for THE VESPERTINE?
I knew I wanted to write a book about a girl who could see the future, but only at sunset. But the book went through several versions before I got to the one that became THE VESPERTINE. Funnily enough, what kickstarted it was watching a recent adaptation of WUTHERING HEIGHTS.