I am writing this review as part of a Novel Publicity book tour. The layout of this post will be slightly different from how I usually format my reviews to make it stand out from my regular posts. Make sure to check all the other awesome blogs in this tour out too, and read the Tour Notes below (you can win stuff!)

Generation by William Knight
4 out of 5 stars

When I started reading Generation I was expecting full horror with a little bit of crime mystery. The first page did nothing to change those expectations; we begin with Patient SW0112 who feels how his own body is decomposing in graphic detail. I got quite a strong stomach for this kind of story; but I was very glad that this book is more than just three-hundred pages of gore.

Hendrix Harrison is a journalist for the Strange Phenomena magazine. When he gets sent to a small village to do research for a story, he comes across something way bigger than just a ghost sighting. There are bodies disappearing from a university facility, and it looks like they were used for testing genetic modification drugs by a pharmaceutical company. People are noticing that Hendrix is digging in stuff he isn’t supposed to and some people are getting very, very annoyed.

When a book has an average rating of over four stars on Goodreads I get sceptical. It’s impossible that everyone loves the same book, right? In the case of Generation I have to admit, this book is of a very professional standard. It’s very well written with just the right amount of suspense, conspiracy, gruesomeness and science. I really liked how the virus that turns people into some kind of concious zombies was developed. Some authors take the easy way out and leave the details unexplained; Mr Knight on the other hand gives us a solid foundation so we can believe in his story.

Generation is a very engaging book. Slowly you discover together with Hendrix what is going on at the university and the pharmaceutical company. For me personally it was too slow. I knew what was going on about halfway of the book, and the main characters took several agonizing chapters until they finally wanted to admit the “big secret”. I did like the big conspiracy though, so I wasn’t that annoyed. The characters were pretty lifelike and layered, but it turned out they just weren’t people I very much liked. It’s hard for me to identify with a single ex-military turned journalist. There was also a little romance that I didn’t understand at all. I couldn’t find any reason for them to be attracted to each other.

Luckily these were just minor problems and they didn’t take away from my enjoyment of the book. I think a lot of lovers of thrillers will adore Generation. I would definitely recommend it, on the condition that you can handle a little bit of gore!

> Please vote for Nyx Book Reviews in the traffic-breaker poll for this tour. The blogger with the most votes wins a $50 Amazon gift card (which is totally awesome). You can vote in the poll by visiting the official Generation blog tour page and scrolling all the way to the bottom. 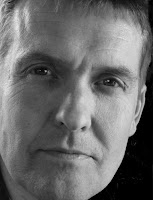 William Knight is a British born journalist and technologist currently living and working in Wellington, New Zealand. He’s chased a varying career starting in acting, progressing to music, enjoyed a brief flirtation with handbag manufacturing and was eventually wired into technology where he’s been since 1989. In 2003 he published his first feature in Computing magazine and has since written about the many successes and failings of high-tech for the Guardian, Financial Times and the BBC among many others publications. He continues to maintain a lively IT consultancy. Connect with William on his website, blog, Facebook, Twitter or GoodReads.