Review: Death of an Avid Reader by Frances Brody

Title: Death of an Avid Reader

Set in the 1920s, the Kate Shackleton books follow private detective Kate as she navigates post-war society and solves murders. In Death of an Avid Reader Kate is faced with two cases – a mother searching for her illegitimate child and the murder on one of Kate’s acquaintances, the clever Dr. Potter.

One of the many great things about mystery series is that you don’t need any prior knowledge of the series. You can easily just dive into part six, Death of an Avid Reader without feeling lost at all. Kate is a likeable and capable lady, recently widowed but with plenty of spunk. She often calls in the help of her gentleman friend who gets mistaken for being a cop, and the banter between the two of them was lovely.

Death of an Avid Reader managed to combine a historical situation which was admittedly, rather limiting in many ways, with characters that defy the culture but aren’t anachronistic. Often in historical fiction the characters will act in a completely 21st century way that just doesn’t fit with the social views that were held in that time. This book stays away from that pitfall, and gives us a female character that’s independent, but knows the boundary of her society. She doesn’t, for example, go into a rowdy pub on her own. She does however, sneak around to pick up clues. The historical setting itself isn’t focussed on, it’s more the background against which the mystery is set.

The mystery took a while to get going. The first fifty pages of the book were particularly slow, with just the search of the illegitimate child of a lady, and nothing exciting. When the murder is committed though, the plot gains speed. I thought of giving up on it in the beginning, but I’m glad I continued reading.

Although it’s nowhere near as tightly plotted, Death of an Avid Reader reminded me of an Agatha Christie novel. It has a more classic approach to the mystery novel, where there are some clues, and the reader is left to figure it all out with the sleuth. Death of an Avid Reader is great for someone looking for a comfortable kind of read. 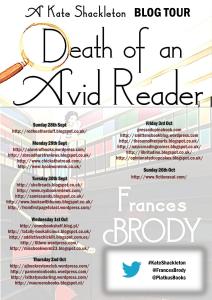 A lady with a secret

Kate Shackleton’s sterling reputation for courageous sleuthing attracts the attention of the venerable Lady Coulton. Hidden in her past is a daughter, born out of wedlock and given up to a different family. Now, Lady Coulton is determined to find her and puts Kate on the case.

A mysterious killing in the library’s basement

But as Kate delves deeper into Lady Coulton’s past, she soon finds herself thrust into a scandal much closer to home. When the body of the respected Horatio Potter is found in the Leeds Library basement, the quiet literary community is suddenly turned upside down with suspicions, accusations and – much to Kate’s surprise – the appearance of a particularly intelligent Capuchin monkey!

This review is part of a blog tour by Piatkus. For more blogs participating, check the schedule in the blurb