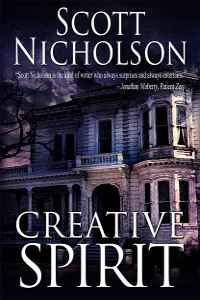 CREATIVE SPIRIT
A paranormal thriller by Scott Nicholson
After parapsychologist Anna Galloway is diagnosed with terminal cancer, she has a recurring dream in which she sees her own ghost at Korban Manor. She’s compelled to visit the historic estate to face her destiny and the fate of her soul.
Sculptor Mason Jackson has come to the manor to make a final, all-or-nothing attempt at success before giving up his dreams. When he becomes obsessed with carving Ephram Korban’s form out of wood, he is swept into a destructive frenzy that even Anna can’t pull him from.
The manor itself has secrets, with fires that blaze constantly in the hearths, portraits of Korban in every room, and deceptive mirrors on the walls. With an October blue moon looming, both the living and the dead learn the true power of their dreams.

“Scott Nicholson explores the dark legends of the southern end of the Appalachian mountain chain, a nightmare country that ends in Stephen King’s yard.”– Sharyn McCrumb, author of The Ballad novels

————–
CREATIVE SPIRIT is Scott Nicholson’s revised edition of the 2004 U.S. paperback THE MANOR. Scott is Kindle bestselling author of 12 novels, including THE RED CHURCH, DISINTEGRATION, LIQUID FEAR, and SPEED DATING WITH THE DEAD. Connect with Scott on Facebook, Goodreads, LibraryThing, Twitter, Blogspot, his website or Amazon page.