Though Nyx Book Reviews is generally dedicated to books of the fantastic persuasion, I also occasionally read outside of speculative fiction. The first book in the Whitstable Pearl series was one of those times (read my review). The second book in Julie’s series is being published this month, and I got to ask her some questions! To find out more about the books mentioned check them out on Goodreads, or visit Julie’s website.

Julie Wassmer: Certainly, Celine. I was born in London’s East End and, fittingly, went on to write for the popular BBC series, EastEnders for almost twenty years – together with other TV series, like London’s Burning. But I had always wanted to write crime fiction and my first book in the Whitstable Pearl Mystery series was published in March this year with Murder-on-Sea following on October 1st. The books are all set in Whitstable, a small fishing town on the north Kent coast where I’ve lived for the past sixteen years with my husband, Kas. I’m also an environmental campaigner and write articles on the subject. In 2010, I wrote an autobiography, More Than Just Coincidence  which focused on how I came to be reunited, by an extraordinary quirk of fate, with my daughter who had been adopted as a baby when I was a teenager. I’m a very lucky lady!

Could you describe Murder-on-Sea in one sentence?

I’ll try! How’s this? The last thing Pearl Nolan expected for Christmas was murder but Whitstable’s multi-tasking restaurateur and private detective soon finds herself embroiled in a seasonal mystery involving several deaths and no fewer than thirteen murder suspects – not all of whom remain around to enjoy Christmas Day…

Murder-on-Sea is the second book in your Whitstable Pearl mystery series. What can readers of the first book expect from your second?

Readers will certainly gain a contrast to the first book in terms of a seasonal change. My first book, The Whitstable Pearl Mystery, took place during the height of the summer, during the annual Oyster Festival, but Murder-on-Sea is set during the run-up to Christmas when an icy north east wind blows in off the coast of Whitstable. There’s a complex murder mystery here for both Pearl and readers to solve, with a secondary plot involving the sending of poison pen Christmas cards. Once again, Pearl finds herself thrown together with DCI Mike McGuire of Canterbury CID, but in this book they are working more in partnership because McGuire has been a witness to the first murder and is therefore excluded from leading the police investigation. And yes, there is more than one murder – but the question is…with the clock ticking on the countdown to Christmas, can Pearl possibly find the murderer before Christmas Day? 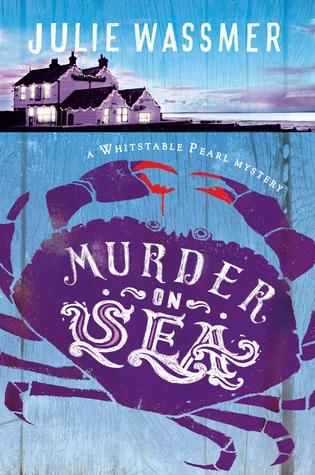 An important part of your novels is the small-town setting of Whitstable. How do you bring this setting to life?

To be honest, I’m really not sure how I do it and I try not to think too much about the writing process – but to trust it – and try always to keep in mind that Whitstable is almost another character in these novels and, hopefully one that readers will come to love as much as I do. I’ve always felt that Whitstable has a unique quality about it because it’s an old fashioned place and has kept its charm, its individuality and its independent spirit in spite of being only a hour’s drive away from London.

In the summer months there’s some good natured tension between the visitors and locals and I’ve also tried to reflect this through the relationship between Whitstable native, Pearl, and the city detective, DCI McGuire, who often bump heads with their different approaches to life and crime solving – while finding one another equally attractive. Whitstable is a seaside town but it’s also bordered with countryside and with the Great Stour river – and also the city of Canterbury just a twenty minute drive away, so there are still a lot of geographical contrasts available within the books but, essentially, I think my heroine, Pearl, embodies the town and if you like Pearl – you’ll also love Whitstable.

What do you want your readers to take away from your books?

Essentially I am just a storyteller so if my readers come to the end of one of my books and feel satisfied that they have just been on an interesting journey with me and some fascinating characters in the lovely setting of Whitstable, helping Pearl to solve a mystery by picking up the trail of clues I leave along the way – then I will be more than happy – especially if they look forward to the next book!

What is the best part of being a writer?

I love being able to live in my own world – a world where I’m able to express myself through the stories I tell and the characters who help me to tell them – but as someone who is an “owl” person rather than a “fowl” person and who therefore comes to life at night and is rather bad at functioning in the early morning, I’m very grateful that writing is something I can do at my own pace! Like Pearl, I am a “people person” and writing brings me into contact with many different people from all walks of life. Over the years I’ve also learned lots of interesting things through my research while writiing for various TV shows, including a medical drama, but now I’m learning lots about the area in which I live too – both Whitstable itself but also Canterbury, our neighbouring city. Hopefully, an added bonus is that I might be able to continue writing for a very long time. The novelist Mary Wesley was 71 years old before her first novel was published and she went on to give much pleasure to many readers. If I could do the same, I would be lucky indeed.

Thank you for answering my questions! 🙂

Not at all. It’s been a real pleasure, Celine. Thank you very much indeed for setting them.