After such a long absence I have something pretty cool in store for you guys! Author Chris Turner is stopping by at my blog today, talking about his latest book, his favourite reads, what he thinks about the blogging community and more. And after the interview he is so kind to give away some copies of his book, so keep on reading! Read more about Chris and his books on his blog. 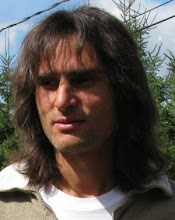 Nyx Book Reviews: Hi Chris, welcome to Nyx Book Reviews! Can you tell us a bit more about yourself?
Chris: Hi Celine, I’m a writer/artist/musician living in the Ottawa, Canada area. My background is high tech, yet I’ve had an avid interest in fantasy and adventure writing ever since I went backpacking and cycling in Asia in the early 90’s. With the advances of e-publishing, I’m very happy to be able to share stories written over the years.
Can you describe your book, Fantastic Realms, in one sentence?
The anthology consists of heroic sword and sorcery, dark fantasy and a little comic relief, with vivid description, compelling action and many major female characters—all written in a sophisticated and eloquent but natural style.
What makes your book stand out from other fantasy anthologies?
Primarily the world-building. The collection brings to light a lot of the best devices used in fantasy world-building. The stories are intensely character-driven and create the atmosphere of an alternate world, which is a necessity, in my opinion, for lasting-impression story-writing. The characters are jaded, somewhat enigmatic creatures, but heroes in the making, who cross the boundary from light to dark. Readers are left wondering about their fates. The exotic settings—from the quiet, bonsai-adorned temple of Sinru and faraway city of the Magi of old Parnoss, to the jungle wilderness of Mostra and the psychedelic “mirror-world” of Ynos and other dark sword-and-sorcery worlds—set the backdrop for the heroes’ epic struggles. My feeling is, if the characters can integrate into their world seamlessly then the stories have a better than good chance of being successful reads.
I am generally unsatisfied with many of the fantasy shorts I read in ezines, for the reason that they don’t live up to the exceptional tradition of fantasy that is out there. Consider the vivid and gripping depth portrayed by the original pulp writers like Fritz Leiber, R.E. Howard and Jack Vance. In modern fantasy, the dialogue is generally very clipped, a lot of it shallow and containing excessive expletives and anachronisms. The description of far or distant worlds is weak and limited in comparison. Though, that’s just my observation and opinion!—I’m not setting myself out to be a critic. Of course, there are notable exceptions: writers such as James Lecky, and Adam Corbin Fusco, (The Jewels of Montefort)—amongst others.

The other “problem” with sword and sorcery genre is that it has been pigeon-holed as “dated and sword-slashing”, the stuff of the 80’s, beaten to death since the early popularity of the 1930’s. As a result, a lot of what is being written is somewhat clichéd. The mountain of material, always growing, has certainly not helped the reputation of the genre, and I think, has contributed to its “dumbing down”. There has been a shift to urban fantasy, which, in my opinion, has become even more clichéd than sword and sorcery—and even worse, attracting some of the more notoriously bad forms of vampire and zombie writing. I think it takes a lot of skill and a love for heroic fantasy to let the world-building features of that genre shine. It is no easy task! I have attempted to revive some of the older tradition in this anthology—but I’ll let readers judge for themselves.
What does your average day as a writer look like?
Pretty much from morning on, writing, editing, doing promotion, and learning new things, i.e. via social media, staying on top of things in online forums. Also designing book covers, making new contacts and friends with writers and readers. It is a pursuit that interests me; though there’s little money to be made in the early stage, yet there’s a higher purpose: getting stories out there and finding out how to make stories better, and how to attract readers to the genre.
Do you still find time to read yourself? If so, what books have you read lately that you particularly recommend?
I make time to read. I finished Last Free City by Tim Stretton and I read his other novels (Dragonchaser, The Zael Inheritance)—all which were enjoyable. Constantly I’m reading and rereading classics like Jack Vance’s Dying Earth series and Alexandre Dumas’ Count of Monte Cristo. I read Michael Shea’s, The Extra. Though very different than his earlier, horror-based, sword and sorcery stories, the book was entertaining enough—if one can get past the tough-guy slang and vernacular, which takes some getting used to. Some Indie writers are Red Tash, with her fast-moving darkish-fantasy tale, This Brilliant Darkness, and Robert Eaton in Hero Always Wins, with his shocking, “good-guy-turned-villain”, though admittedly, problematic, with its collage of interconnected scenes and characters.
You have a blog of your own. How are you enjoying the blogging community?
Very much. Personal blogs, I believe, are the best way for writers to share their opinions and vent their passions and frustrations. They can get a load off their minds and contribute valuable information to the community. I started my blog in August with the intention of creating a relevant sideline on the theme of “The craft of writing fantasy fiction”. The articles I posted started to get more detailed than I’d originally thought—but better more detail than not enough. I’ve had some good response, considering the blog’s infancy. A huge blogger community exists out there, and writers like myself, readers and enthusiasts are always sharing knowledge and discoveries in big ways. That’s what made it easy for me to get into the publishing market in the first place: the variety of free information and things to watch out for.
What are your plans for the future? Any more books coming up?
I continue to write new stories and interact with readers—I do interviews and offer giveaways and submit new books to review sites. I’m also in the process of digesting the last beta reading for the third and final book of the Rogues of Bindar epic fantasy series, which is scheduled for release in Oct. 2011. Here, a fugitive-outlaw, caught in a net beyond his control, tries to run from his destiny and finally understands that he must face his fate and help rid the world of a demented sorcerer.
There are always new ideas streaming through my head, and with the ease of uploading and distributing new books by Indies, I’m very excited!
Thank you for answering my questions! (:
Thanks for inviting me!
Giveaway of three ebook copies of Fantastic Realms