The third book in The Wave Trilogy, Spira Mirabilis, is being released today from JoFletcher books. In honour of this release, author Aidan Harte is answering some questions today, including the beautiful reader’s question asked by Bas. To find out more about Aidan and his books and art, visit his website. 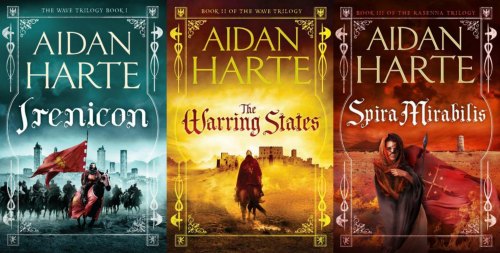 Could you tell us a bit about yourself?
I live in Dublin. Irenicon was my first book and I conceived the basic idea of a medieval town divided by a sentient river while studying sculpture in Florence. Before I started writing, I was an animator. I directed a show which appeared on Cartoon Network and BBC.

Could you describe your series, The Wave Trilogy, in one sentence?
History is a river and its water can be temporally diverted, siphoned off or dammed up but it always reaches the sea finally.

Your second book, The Warring States came out a few days ago. Was writing the sequel different from writing the first book in the series, Irenicon?
We’ve all seen movies with happy endings, and wondered what happens after The End. Irenicon ends with Rasenna overcoming its internal divisions to defeat a Concordian army. Lots of Fantasy’s empires have feet of clay, they lose one battle and crumble like badly-briefed politicians in front of Paxman. But empires die hard. The Warring States therefore begins with a change of scenery and a rewind: we’re in Concord two years before the events of Irenicon, watching a boy being sold by his mother to the Engineers’ Guild. As readers experience the brutal education that makes Torbidda into a tyrant, they start to understand Irenicon differently.

When we return to Rasenna, we discover what an ill match the City of Towers and happy endings make. Rasenna’s unity is threatened from within, as rich and poor compete for control, and without, as Concord returns stronger than ever under Torbidda’s leadership. Rasenna’s young Contessa likes to solve problems with the business end of her combat banner but that method won’t work this time. She’s pregnant and unmarried in a society where that’s scandalous. And gossip is the least of her worries because now Torbidda is fixated on killing her child.

Fantasy is an old genre, and many fantasy books have been written. How do you keep your books fresh and original?
Even when a writer takes a well-worn theme (and they’re all well-worn) a good writer will always make it their own, just to keep herself or himself entertained. There’s been lots of music composed too and yet there no shortage of new tunes. This only seems like a problem because we live in the fall out of the Post-Potter explosion, when new fantasy titles multiplying like Ebola.

This too shall pass.

It’s important to find inspiration beyond contemporary fantasy, in myth and literature, and – above all – life. Some misguided voices advise writers seeking to get published to do just the opposite, but knowing what’s trending in the genre is the job of agents and editors, and only a small part. By all means research who’s sold what after you’ve written your story, but the whole point of Fantasy is to discover new ideas. An agent looking for a book to slot into a fad is an agent you don’t want.

Do you still have time to read yourself? If so, have you read any books lately that you’d recommend?
My wife and I are currently fighting over custody of our copy of The Passage by Justin Cronin. I may have to get a court order. You’re also a sculptor. Does your art somehow tie in with your writing, or is it completely separate?
A bit of both. I’m drawn to fantastical subject from Myth. Centaurs, minotaurs, harpies, cyclops and so on. The rendering is realistic in as far as they have an anatomical solidity, but in another way they are complexly surreal. Sounds like Fantasy, doesn’t it? I divide my year between writing and sculpting. It works because I do many drafts. The sculpting involves planning, building armatures, working with models, clay and wax, and many foundry visits. So each draft is interrupted by an unrelated activity and I return with a fresh palate. Check them out, incidentally, at Tumblr.

Thank you for answering my questions! (:
My pleasure!