Lately I’ve been feeling like reading more fantasy – not the paranormal crossovers that dominate large portions of the market, but the good old epic variety of fantasy. I started to browse Goodreads, but I discovered that it’s actually not that easy to come by decent fantasy recommendations. The names that pop up over and over are always the same: on the modern side we have George R.R. Martin, Brandon Sanderson, and Patrick Rothfuss; J.R.R. Tolkien, Robert Jordan and Guy Gavriel Kay are the traditional authors. These writers are great – but I’ve read most of them already. I’m looking for other names, authors that might not have a following of millions, but maybe of thousands. Writers that have something else to say, that have some different or fresh voice.

So the goal of this post is twofold. First, I’ll share a few of the great fantasy books I’ve read lately that you might not have heard of yet. Secondly, I’m looking for recommendations outside of the obvious fantasy canon. So if you have an author you think I should try, I’m more than happy to hear from you!

The Iron Age series by Angus Watson – Age of Iron (read my review), Clash of Iron & Reign of Iron

The second book in the Iron Age series is being published this month, and I was lucky enough to receive an ARC. Watson writes incredibly readable fantasy – where fantasy is notoriously dense, Watson keeps his language simple and his world building within boundaries. The premise of his books are also interesting: set in an alternate version of Britain during the iron age when the Roman Army is approaching. The series is scheduled to be a trilogy, with the last book being published this September.

There is plenty of assassin fantasy out there, but not many of the books out there handle the subject as well as Sprunk does. His main character, Caim, navigates a world which is heavily inspired by the Roman Empire, and nothing of his assassin nature is glossed over or romanticised. Caim is a killer, and the reader sympathises with his situation without forgetting what he is. The trilogy has already been completed, which is also a bonus. 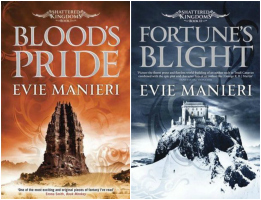 You know what’s missing on many fantasy lists? Some female authors. Manieri writes highly complex epic fantasy, which isn’t easy to get into. She has some very interesting ideas, and stays away from the standard European medieval world, instead largely setting her story in a desert. I was very impressed with how she handled the climax in Blood’s Pride, tying all of her story lines together beautifully, something even some of the most accomplished fantasy writers struggle with. The story is still uncompleted though, and as far as I know there has been no indication as towards how long the series will be. A trilogy seems likely though.

The Tales of the Ketty Jay series by Chris Wooding – Retribution Falls (read my review), The Black Lung Captain, The Iron Jackall & The Ace of Skulls

A different style from the other books in this list, Wooding’s series features a more steampunk inspired world. If you’re more interested in one group’s adventures rather than the fate of an entire world, The Tales of the Ketty Jay is your series. The ragtag crew of the Ketty Jay airship get into more trouble than they can handle, and it doesn’t help that all crew members seem to be hiding something from the others. The series has been completed, so this might appeal to readers who don’t enjoy waiting for the next book. Some readers have compared these books with the TV show Firefly – make of that what you will.

What fantasy books would you recommend?