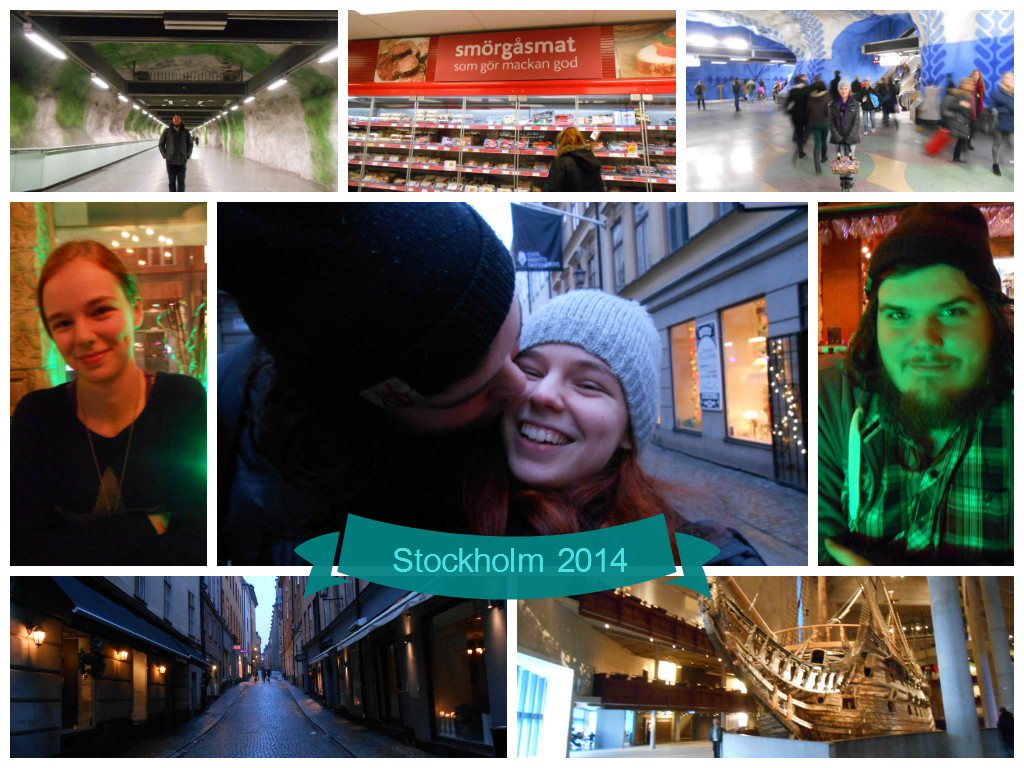 I like to travel – and I’ve been lucky to have been visiting some pretty awesome places lately. In my Exploring Europe posts I talk about the occasional trips I make throughout the continent.

My boyfriend has had a slight Scandinavia obsession for a while, and for his 21st birthday I decided to let his dream of visiting Sweden come true. So I told him we were going away for a weekend, and that we were flying somewhere, but where was a mystery. On his birthday, only days before we were leaving, I told him the destination was… Stockholm, Sweden!

I put a lot of thought in whether Sweden was doable, since it is quite far away and I heard it was extremely expensive. Ryanair, the price-fighter flying company, had an amazing offer when I was looking for flights though, so I was sold immediately. Hotels were a different matter though. Holy shmosby, it is so hard to find an affordable Swedish hotel. Even the chains were out of my league, so I tried finding a room through a site one of my friends recommended, airbnb.com. It’s basically a place where people put up an ad if they have a room or bed for people to crash on. Even though they encourage customer reviews, and they have pictures and phone numbers and identification, it’s always a surprise what you’re going to get. I found a pretty good-looking one in the centre of Stockholm (at least, where I was assuming the centre would be), and the man renting it was very efficient and nice. The trip from 1 to 3 February was a fact! 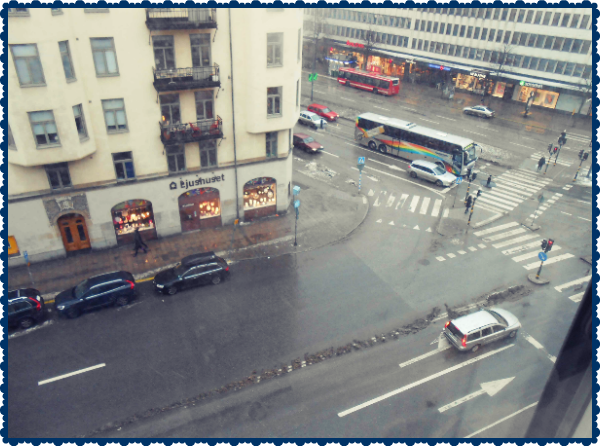 Ryanair has this policy where cabin luggage is free, and extra suitcases costs a butt-load of money. For most people, including me, this means that you stuff ALL THE THINGS in your cabin luggage. Since we were only going to be two nights in Stockholm, I travelled as light as possible. Just one change of clothes, an extra pair of shoes, plenty of winter gear (gloves, scarf, hat), one book in my purse and one extra just in case (I can’t resist), some emergency food and toiletries. For city trips I strongly recommend using a backpack instead of one of those rolling trolly things. You really don’t want to be navigating the tube with one of those, carrying it up and down stairs, getting it stuck in sliding doors… A decent backpack makes your life a lot easier.

Me and Bas can both get stressed pretty easily, so we like having a HUGE margin when flying. We usually arrive at the airport like three hours before our plane leaves. So at ten in the morning on February 1st we took the train from my mom’s house to Eindhoven, where we got some coffee at Starbucks, and continued to the airport bus. It was quite crowded at Eindhoven Airport, but since we were so early we had no trouble getting through security. Our flight was slightly delayed, but nothing crazy. And then it was just a one hour and forty minute flight to the Swedish capital! 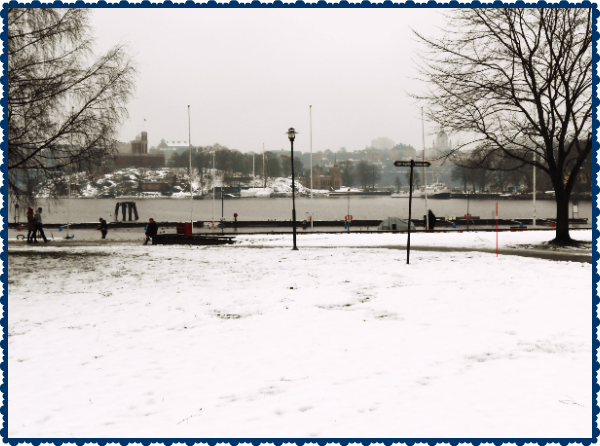 We landed on Stockholm Skavsta Airport – which is in the middle of nowhere! I’m sure that even for Swedish standards, this was no-mans land. I don’t think there even was a city close, it was just a tiny structure with a landing strip. They didn’t even have desks where you show your ID/passport, just some random police people standing in a hallway. It was dark by the time we landed, so the one hour and forty minute (!) bus drive to Stockholm was boring. On the way back we discovered we didn’t miss a thing – it was just one long road of pine trees, rocks and snow.

We quickly found out that although Swedes really do their best to accommodate tourists (restaurants have separate menus in English) so many things are extremely confusing. Especially finding out what bus/metro ticket to get was quite the adventure. Almost all Swedes we talked to knew impeccable English though, a lot better than the normal hands-and-feet-language most people speak (you know, where you need three hand movements to explain every word). So if you’re in Sweden, and confused about anything, just ask someone. 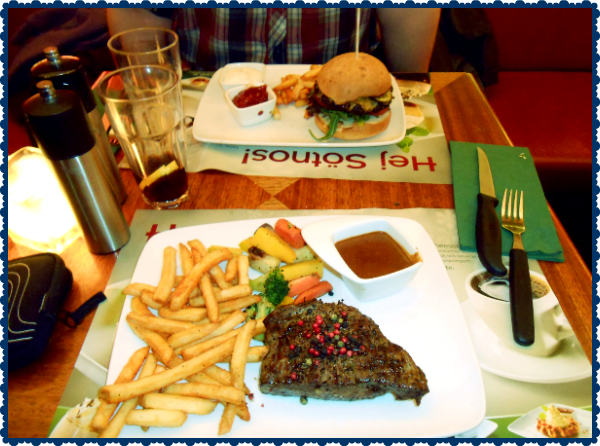 We had dinner at a lovely place that served steaks and hamburgers, as we could basically eat a whole cow by then. What you always hear about Scandinavia is true. SHIT’S EXPENSIVE YO. I mean, REALLY expensive. Maybe the exchange rate from Euro to Swedish kronor just sucks, but eating or even just getting a cup of coffee was damn costly business. The supermarket was pretty affordable though, and especially their bread products were a life saver. I’d definitely recommend bringing your own lunch when traipsing through the city if you’re on a budget.

After a solid night’s sleep we discussed over what to do with our full day. We were there on a Sunday, in winter season, and looked up on the internet whether attractions were open. I’d definitely recommend doing this – although the huge touristy things were open, plenty closed around four o’clock. We made a visit to the Vasa museum and Gamla Stan. 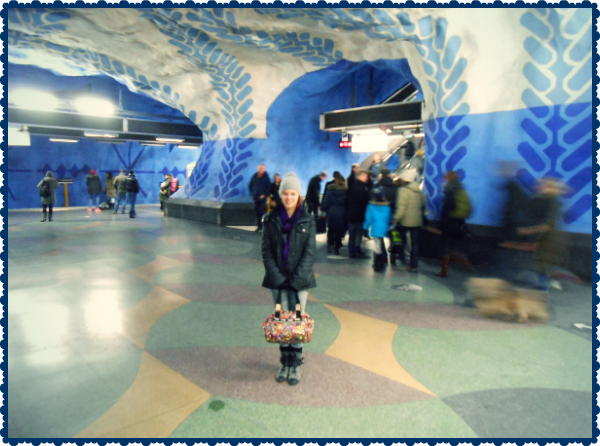 It seems that all big museums are on the same island, maybe to make it easier for those stupid tourists that can’t make sense of the bus system (we couldn’t even find the main bus terminal, derp). The easiest is to just take the tram to the island and walk from there. Poor Bas had crappy shoes, and he basically just shovelled snow inside. But awesome navigators as we are, we managed to walk around the entire Vasa building before we found the main entrance (probably trespassing in the process). Inside it was nice and cosy though, and Bas had a chance to defrost his feet and wring out his wet socks. 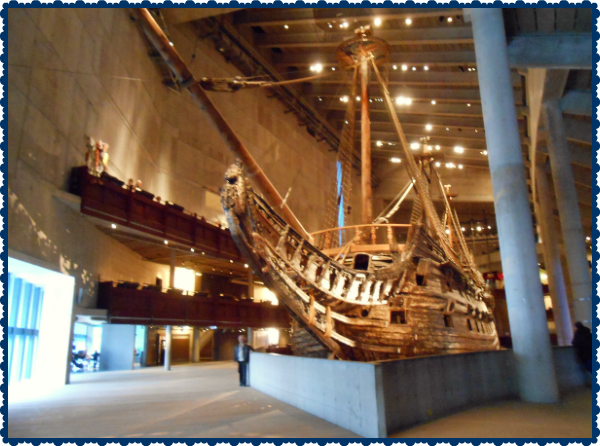 The Vasa museum is very impressive. The Vasa is basically a big 17th century ship, preserved almost in its entirety. It’s huge, and just kind of gets in your face the moment you enter. It is covered in beautiful wood carvings and it’s so interesting to imagine life on such a ship. The museum has all kinds of displays with clothes of passengers, a replica of the hold that you can walk through, and other fun stuff that hold our interest during the entire morning. The museum was pretty crowded even though it was a random day, mainly with Swedish couples with children. 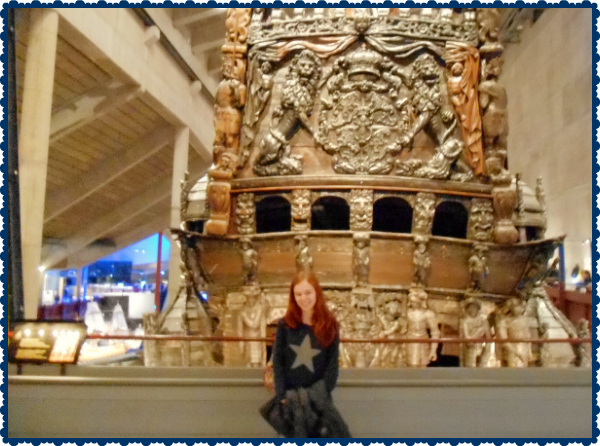 Afterwards we drank a very expensive, though delicious cup of coffee near the central station. They even had lactose-free milk at the coffee shop, which I applaud as lactose-intolerant person. Afterwards we went to Gamla Stan, which is the historical inner city. Basically all of Stockholm is fully modern buildings, a very strange experience for a Dutch person, except for Gamla Stan, which is left in the original building style with lower coloured houses. Although it wasn’t even four, the stores were already closed. We came across a super cute English book store, but that had already closed at three. It was great to just take a walk through it though, and afterwards we took an extended walk over the other islands. 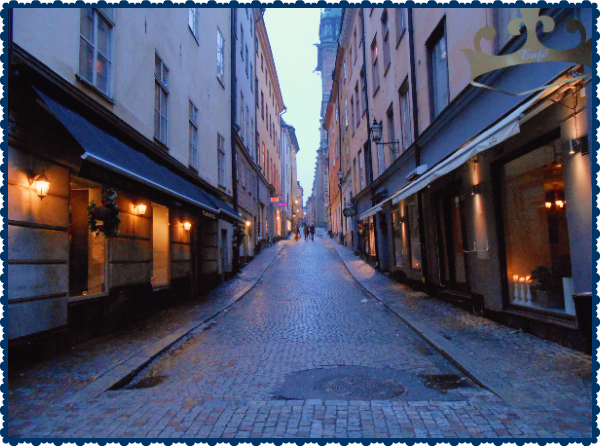 Stockholm is very different from any city I’ve ever visited. All west-European cities tend to preserve the old architectural buildings and just plant new ones far in between. Stockholm is almost entirely shiny new, with huge street-spanning buildings holding multiple offices and businesses. They also reaaally like building things on top of each other, managing to create a network of tunnels for cars, bridges for cars, ten-story buildings, and tube tunnels. They have a few car tunnels that are longer than a kilometer. We drove through a few of them with the bus, and I can’t imagine having to navigate Stockholm in a car, especially since GPS doesn’t work in tunnels. 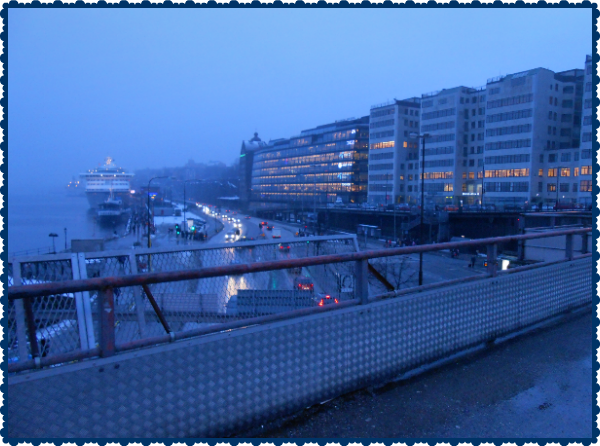 Alcohol prices in Sweden are government-regulated and therefore very high. Instead of going broke over a glass of beer and a wine we decided to go see a movie after we finished our delicious pizza’s. Since Swedes don’t dub their movies, but subtitle them, you just get the same English version there. We saw The Wolf of Wall Street in one of their theaters, and had a great evening. I’d definitely recommend catching a movie as evening programme if you’re not overly fond of going for drinks. Going back to the hotel after dinner feels very dull, and there is nothing much else to do in the evening that your tired feet will appreciate. 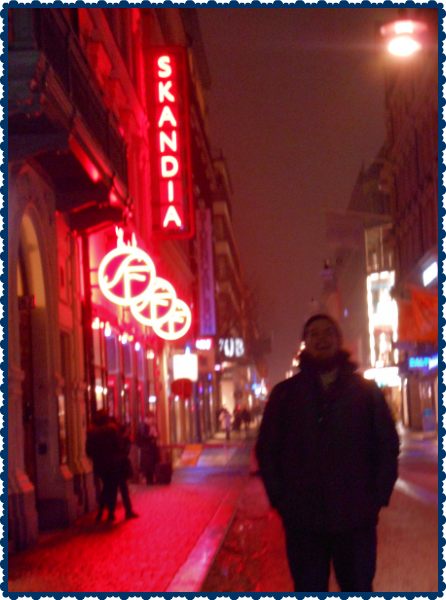