Do You Read Misbehaving Authors?

So recently I read this book that was in a Kindle sale. It’s quite popular, and many people have read and reviewed it. When I was browsing through Goodreads I saw that this book was part of one of the scandals Goodreads is notorious for: authors behaving badly. Many people put authors that misbehave on blacklists (which are now mostly banned on Goodreads), so they won’t accidentally read on of their books. I took a moment to think about this for myself, considering whether I want to not read a book that seems enjoyable to me, because of the writer’s personal behaviour.

Without going too far into it, generally the “misbehaving author” scandals follow a certain pattern. They usually start with a blogger/reviewer writing a negative review. Then the author, or people closely affiliated to the author respond on the review in a negative manner, calling the reviewer out, saying something offensive or be otherwise condescending. Then, a whole shitfest explodes as dozens of people take the time either to defend the original poster, or to leave some further inflammatory comments. There are also cases concerning sock-puppet accounts, harassment via social media or email, threats, calling people to upvote/downvote certain reviews… Etcetera. 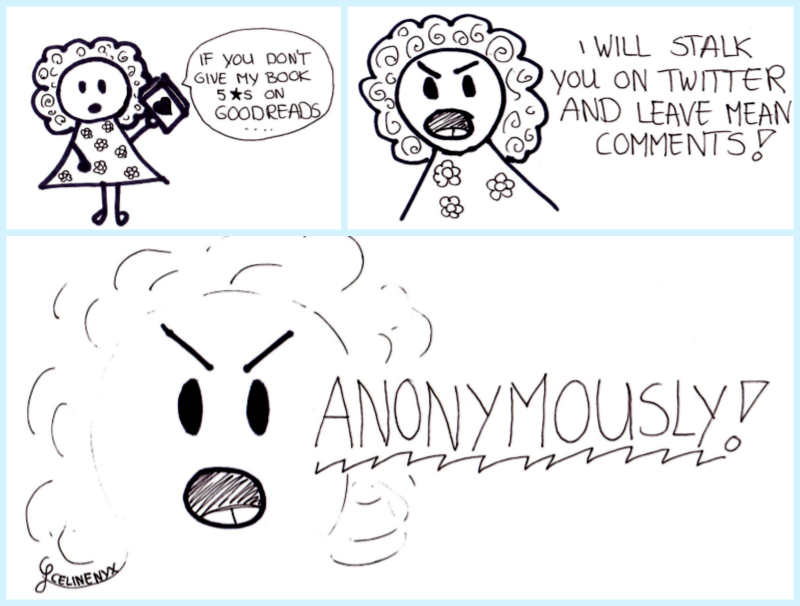 Now, I want to make it clear that I don’t condone any of this behaviour. I think everyone has a right to say what they think, and it’s important to keep a respectful distance as an author. Commenting on a review is tricky business, as is calling someone out on social media. Your best bet is just to stay away from any of that on the internet, and complain to a real life friend instead. That’s what those are for, right?

I’m not sure if I’ve talked about this before, but for me authors are unicorns. They’re the mystical beings that we’ve all heard about, slaving away in their writing caves, churning out these little gems called stories for all of us to enjoy. I see a book as a product, something unconnected to an actual person. Even though I have plenty of favourite writers, I barely have any thoughts about them as a person. If I would know them well, I feel like some magic of their books would be lost. Stephen King was an alcoholic and drug addict. Do you really want to know that the hard-earned money you’re paying for his books are probably going towards feeding his addictions? Probably not. So in favour of keeping the illusion intact, I rarely ever look anything up about the authors I read.

In a sense I’m basically being extremely selfish and sticking my head into the sand. My only excuse is that I prefer to pick my battles, and some author tweeting one wrong tweet is not a battle I want to fight. I’m hanging on to my energy for authors that really do something that offends me fundamentally, like authors supporting anti-gay organisations, or known abusers.

It’s everyone’s right to choose what to do with their own money, and I completely respect anyone that decides not to read an author because he/she did something the reader doesn’t agree with. I personally believe that humans just do stupid things, and probably regret them immediately afterwards. That doesn’t excuse the behaviour itself, but I do understand it. And because of that I’m not letting it stand in the way of me enjoying a perfectly fine book.

I’ve decided not to get sucked into the drama and to just read whatever looks interesting to me. So I won’t be blacklisting any books, or paying attention to author dramas (unless it has to do with authors plagiarising other authors or something terrible like that).

What do you guys think? Do you read authors that have been behaving badly? Do you follow author drama and choose books accordingly? Also interesting, does reading a book by an infamous other influence your judgement about the book?