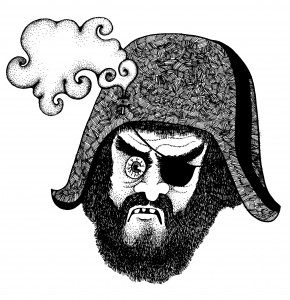 The battle against piracy is still raging; yet it seems to be a battle against thin air. How are we to punish these crooks that invade our internet safe waters and steal our copyrighted content? There are laws that can put digital pirates into jail or forces them to pay massive fines – yet there are so many misconceptions about piracy. In this post I’m going to name a few of them. I don’t condone piracy, but I think it’s important that we have to put this issue in perspective instead of making it pure black and white.

1. Pirates are not all geeky hacker kids with long hair that live in their mom’s basement

Those persons will most probably NOT be an active pirate (someone who posts the content). In my experience it’s actually mostly people in their fifties that pirate stuff. That might come as a shock and feel counter-intuitive, but the younger generation seems to be more into indie games, music or books. And indie will cost you a few bucks and sometimes even less. What’s the point in pirating something that barely costs you anything?

Your neighbour, your teacher or your boss, or maybe even your mom or dad might be a pirate. Do think about this before you start yelling for retribution. Do you really want your mom to pay a $100 fine for every song that she downloads?

2. Pirates do what they do to hurt people, because they’re evil

Internet pirates are the not-so-creepy part of the internet underground. If you want something, they provide. But they’re not driven by the need for money, but quite often because they actually want to help people instead.

Consider the following scenario: you absolutely love a certain show. It was on yesterday, but you couldn’t watch it because you were distracted and you forgot about the time and now you’re sad. It’s not out on DVD yet, and you have no fancy video-on-demand thingy that makes sure you can watch it. Will you skip this episode until the DVD comes out, or do you download it from a torrent website where someone put it for all the world to enjoy?

3. Every item pirated is a sale gone to hell

I cannot stress this enough. DOWNLOAD DOES NOT EQUAL SALE. This should be repeated one thousand times everyone brings piracy up. Just the fact that someone decided “Hey, let’s download this completely free thing, I might like it” does absolutely NOT mean that that person would actually want to pay money for the same thing. That person might not have enough money to pay for a $20 hardcover book, and maybe they live a long way from a decent library. Yet they will pick that same book up from the internet because it’s free. Not for any other reason than the fact that it’s free.

I should also add, especially in the case of ebook piracy, that people who download ebooks often already own the book in paperback or are planning to buy it, but prefer the convenience of having it as ebook. At the current state of affairs you will have to buy a book twice if you want it both on your ereader and in your bookcase – something that’s obviously unreasonable.

‹ Review: Lucretia and the Kroons by Victor LaValle This Week’s New Books ›