As part of the Black Dagger Brotherhood Summer I’ve got going on these months, Joy from Joyous Reads has agreed to share her BDB experiences! Her favourite couple also happens to be my favourite couple, heh.

There are literally several thousands of vampire books that have been published in our lifetime. So many, that there isn’t a concrete number to date. The vampire lore has been – and I think – will always be written and re-written because there is something seductive about its evil roots. From Dracula, to The Vampire Chronicles, and the recently more virological version from Guillermo del Torro, the vampire lore will always be of interest in Literature. Whether you prefer them romanticized or with a more sinister flare, we will always have an affinity for these blood-sucking predators. 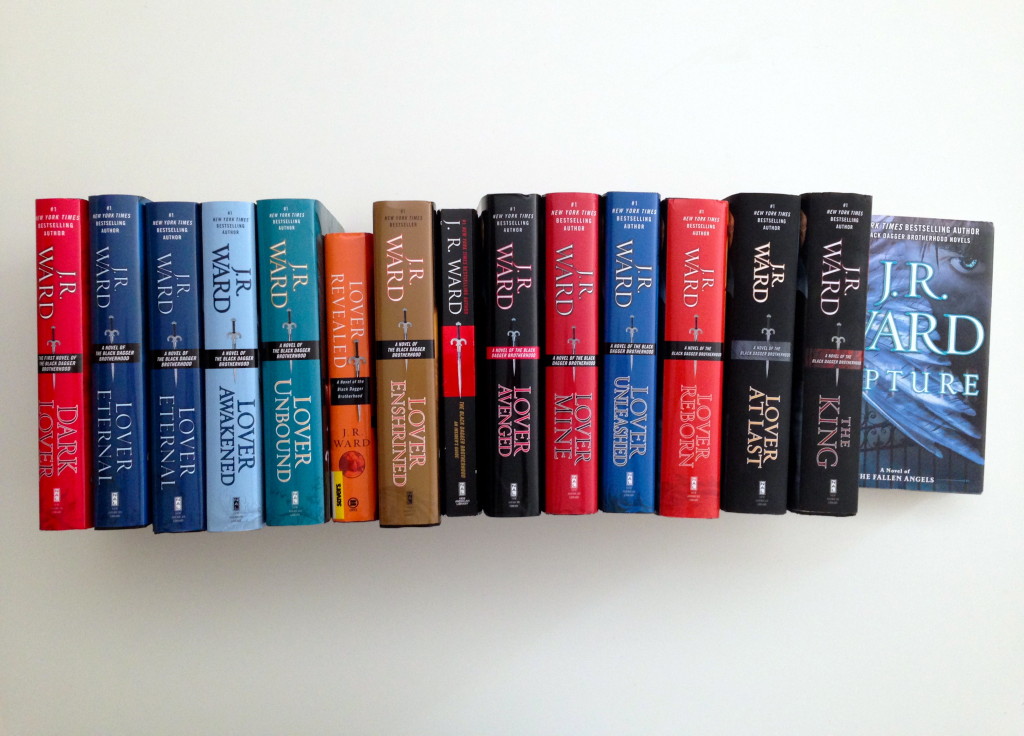 Four years ago, I saw a much-to-do about a book I wasn’t at all familiar with at the time. Several of the people I follow on Twitter were talking about how excited they were of a certain book’s release. In all honesty, I wasn’t at all impressed with the title: Lover Mine. It’s one of those books that I wouldn’t dare read in public, for sure. Even so, I ended up picking up the book on my next bookstore jaunt. Little did I know that this book was actually number 8 of a series that have an innate following already. Someone on Twitter told me of this fact. She suggested I read the series in order. I picked up Dark Lover and read it one day. The rest, as they say, is history. I’ve been a big fan ever since.

Every year, The Black Dagger Brotherhood series tops my list of most-anticipated release. It has been the greatest source of my excitement and dread. Coming in late into the game, the first eight books of the series have somewhat become a gift of sorts; something that can be compared to as opening a present wrapped in a bow. I never knew what to expect.

Almost predictably, Zsadist and Bella’s story immediately became my favorite. Zsadist is what you could call as a tortured hero. He aimed to be bad, and has the predisposition to punish himself. Indeed, self-flagellation was what he excelled in. That is until he met Bella. The attraction, though instantaneous, was met with a lot of contention from the Brothers. Zsadist, after all, was the most dangerous, fierce, and careless among all. When you don’t have anything to lose, you tend to live without much purpose. When he met Bella, the fight became a battle of wills for him. In spite of himself, Zsadist couldn’t deny the attraction. However, he couldn’t see himself deserving of something pure and beautiful.

Bella put up a good fight, not with herself but against Zsadist. The more he pushed her away, the more Bella saw the good in him. If you think Bella has prostrated herself for the affection of one man, you will be wrong. In fact, Bella is one of the strongest heroines in this series. Her strength came from her ability to care for a man so broken; he couldn’t see past his scars. Her strength came from her stubborn will to love him even if he can’t love himself. Hers was not martyrdom. Hers was a love meant to withstand Zsadist’s self-hate.

There are currently 12 books out in this series; each one offering its own brand of addiction. Some say this series have become a copycat of each proceeding books (I disagree). JR Ward manages to give me something to look forward to every year. So much so, that I dread the day she decides she’d had enough of Caldwell, New York.

‹ Review Rewind: The Magician’s Nephew by C.S. Lewis Review: The Army of the Lost by Lily Herne ›